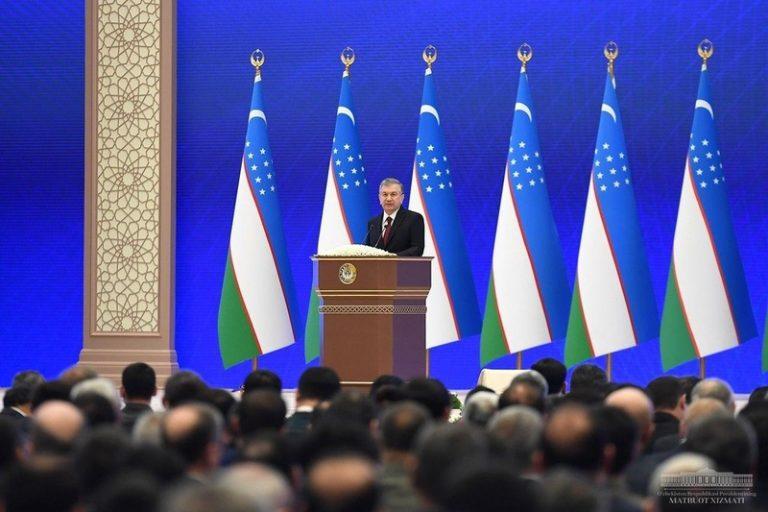 President Mirziyoyev’s state of the nation address on January 24th provided good insights into the next steps of the modernisation and reform process as the end of the 2017-2021 national development strategy cycle nears. Since 2017, the international community has taken good notice of the rapid progress in Uzbekistan; last year, The Economist magazine named Uzbekistan ‘country of the year’. While this is certainly a source of pride, President Mirziyoyev asked the country not to rest on its laurels, as much work lies ahead to consolidate and expand reforms. His speech was forward-looking and ambitious while at the same time acknowledging shortcomings.

Sensitive issues which were previously not easily discussed in the public domain were raised by President Mirziyoyev. For example, the role of civil society and media – widely considered the fourth pillar in consolidated democracies. There is now an acknowledgement that civil society and media need to be given greater space to actively participate in the public life of the country. Greater interaction between government and civil society organisations is needed, with the latter firmly included in government efforts to address corruption and ensure an inclusive society.

In Uzbekistan, every year carries a specific theme. President Mirziyoyev has designated 2020 as the year of Science, Education and the Digital Economy. The international competitiveness of countries is increasingly determined by how quickly they adopt digital technologies in production processes. Digitalisation is also critical to enhance Uzbekistan’s competitive economy capable of creating enough jobs for young skilled Uzbek graduates. Furthermore, digitalisation has numerous positive spillover effects across society – increasing the effectiveness of public administration; simplifying business transactions and operations leading to lower transaction costs; and facilitating the interaction between citizens and government, a chief priority of President Mirziyoyev in order to increase public trust.

Lastly, digitalisation provides synergies with the new EU-Central Asia Strategy which explicitly mentions that both regions will enhance cooperation in the sphere of digital economy. Given its cross-cutting nature, digitalisation will be a key aspect of cooperation in areas as diverse as integrated border management; public administration reform; trade, transport and energy infrastructure.

Uzbekistan has the highest population in Central Asia, 60% of whom are under the age of 30. Thus, the development of a specific youth policy concept “Youth of Uzbekistan 2025” is a very important step as it is addressing the needs of the majority of the Uzbek population. In order to raise the quality of education in line with international standards, the President spoke about enhancing qualifications for more than 6,000 teachers and investing money in the construction of hundreds of new schools and improvements to existing ones. In higher education, Uzbekistan has already seen considerable improvement since President Mirziyoyev took office. The number of students in tertiary education has doubled since 2016 and the establishment of 19 new institutions and universities will ensure that that number continues to grow. Significantly, of these 19, nine are branches of foreign institutions like Webster University from the United States and Bucheon University from South Korea – in addition to the 13 foreign university branches already present in the country. International collaboration in education is vitally important for the future development of Uzbekistan as it will train a new generation of Uzbeks to understand foreign cultures and develop cross-border people-to-people links while giving them the transferable skills needed to further drive innovation and progress in the country.

President Mirziyoyev’s appreciation for international cooperation in education is welcomed by the EU, which as it outlines in its new Central Asia strategy is keen to expand this cooperation with Uzbekistan, focusing in particular on encouraging greater participation in the Erasmus+ programme. Aside from broadening the horizons of Uzbek students, increasing and improving the number and quality of education options has the added benefit of combatting issues related to radicalisation and drug abuse, key domestic objectives but also aims of the EU’s Central Asia strategy. As such, President Mirziyoyev is clearly demonstrating his country’s acknowledgement of the issues, and a willingness to work with international partners to find mutually beneficial solutions.

President Mirziyoyev also made specific reference to poverty and considered the need to address the urban-rural divide in his speech. The President has not explicitly used the term ‘poverty’ before, but it is significant that he has done so. Certainly an important part of addressing issues and problems is to admit them to the fullest extent in the first place and by using this term the President is injecting a sense of urgency into the discourse surrounding the matter in Uzbekistan. The President made note of housing projects in both rural and urban areas, since 2016 the number of affordable apartments and houses has tripled with more than 116 billion Uzbek Soms (EUR 11 million) allocated to 5,000 low-income families to improve their living conditions. These programmes must be continued and expanded if Uzbekistan is going to achieve an effective population balance between rural and urban environments.

Central Asia as a region has suffered from rural decline perhaps more than other regions and this decline has a plethora of consequences, economically in areas like agriculture and food production but also in cultural heritage as traditional practices and minority languages are lost if most young people are moving to cities or abroad. President Mirziyoyev is doing the right thing addressing this crucial, but often overlooked issue. In time, with continued investment and development, lessons from the West show us that sustainable urbanisation means people become more inclined to move out of the city and back to more rural communities, especially when starting families. The President’s work in this field is thus not only an encouraging and impressive sign of foresight but also a demonstration that he is committed to improving the lives of not just city dwellers, but all Uzbeks, wherever they may find themselves.

At this stage of Uzbekistan’s economic development, where a more diversified approach is pursued, it is critical to support private sector development and Small and Medium Enterprises (SMEs) for a new generation of entrepreneurs to blossom. SMEs are the backbone of a solid and prosperous middle class; and are considered engines for growth, competitiveness, innovation and job creation in an economy – and this is particularly relevant for Uzbekistan which needs to absorb approximately half a million Uzbek youth joining the labour market annually. For this to happen, it is necessary to address gaps in financing and facilitate SME participation in regional and global value chains.

Linked to private sector development is the need to strengthen the export and transit potential of Uzbekistan. This has been greatly facilitated by rising bilateral trade turnover with neighbouring countries during the last three years (thanks to both Uzbekistan’s opening up and rising demand for the emerging markets to its South and East). Its planned accession to the World Trade Organisation (WTO) should also enhance Uzbekistan’s trade competitiveness further.

The transit potential of the country has potential to more than double in the near future too (this will require a focus not only on hard infrastructure but on soft components too such as regulations and standards). Transport and connectivity are crucial for the growth and development of a double landlocked country like Uzbekistan. Having a more efficient, and reliable transport network, will help boost Uzbekistan’s growth and maximize the country’s potential as a transport hub at the heart of Central Asia.