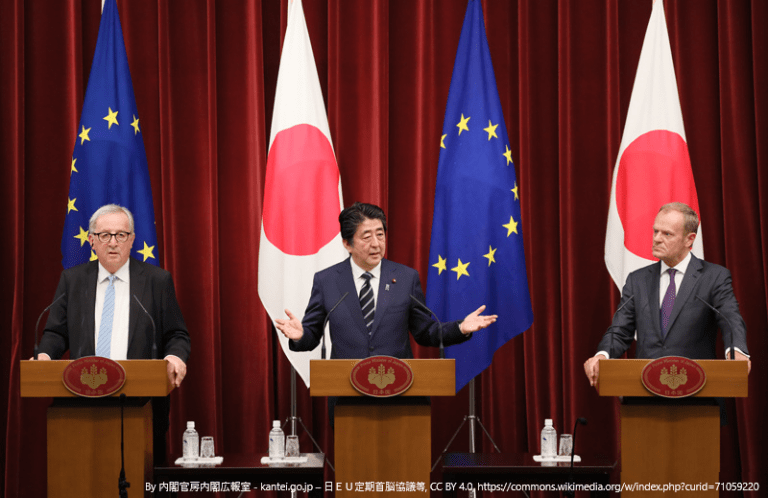 Meeting in the Middle: The EU and Japan in Central Asia

In the fall of 2019, the EU-Japan Partnership on Sustainable Connectivity and Quality Infrastructure (hereafter the EJCP) was signed, building on the already existing agreements between the two countries: the Strategic Partnership Agreement (SPA), and the Economic Partnership Agreement (EPA). The EJCP signals a push for greater cooperation between the two actors. One thus far understudied region where collaboration could converge would be in Central Asia, where the EU should explore potential synergies with Japan. Working together with “like minded and other relevant partners to develop mutual understanding and cooperation in areas where interests converge” is advocated for in the 2019 EU Strategy for Central Asia, and talks have already taken place with Japan – it may be time to put this into practice, firmly consolidating their intents.

Japan extended diplomatic ties to the region immediately following the collapse of the USSR. However, efforts ramped up in 1997 when Prime Minister Hashimoto Ryutaro began to officially focus on Central Asia, branding Japan’s efforts as its ‘Silk Road Diplomacy’, which arguably foreshadowed China’s current Belt and Road Initiative. The Japanese “Silk Road Diplomacy” still frames relations to a certain extent and concerned three main points. These points were 1) enhancing dialogue, 2) increasing economic prosperity in the region through partnerships, and 3) building peace through democratization, regional stability, and nuclear non-proliferation. Efforts were largely limited to two forms of financing, Official Development Aid (ODA), in the form of grants and favourable loans, and the promotion of private investment in the region. In fact, Japan was the top donor for many years, and regained its ranking in Uzbekistan between 2013 and 2016.

Since its launch in the 1990s, Japanese interest in the region has been partly inspired by a genuine desire to advance the region’s development, and partly by geopolitical concerns, including energy security. The grand majority of Japanese oil imports derive from the Middle East, making the Central Asian Republics’ (CARs) alternative energy reserves an attractive substitute. However, since oil and other energy sources cannot easily be transported to Japan from the CARs without entering Chinese or Russian territory, this option poses several challenges.

Following suit, the Central Asia (Kyrgyzstan, Kazakhstan, Uzbekistan, and Tajikistan, with Turkmenistan as an observer) + Japan Dialogues (CAJ), were started in 2004 under PM Koizumi Junichiro, and were at the time pushed by Minister of Foreign Affairs Kawaguchi Yoriko. Similarly to Silk Road Diplomacy efforts, this forum is also concerned with the economic facets of the relationship, with significant emphasis placed on water problems, such as the desiccation of the Aral Sea. Infrastructure and energy development also figure prominently, as well as counter-terrorism, particularly as pertaining to the situation in Afghanistan.

The most recent CAJ, held in 2019, mainly focused on the economic side of the relationship. Again, the security situation and Afghanistan were also highlighted as the other important pillars of their relationship. However, none of Foreign Minister Kono Taro’s goals pertained to democratic transition. These goals were the “(1) “open,” (2) “stable,” and (3) “self-sustained development” of Central Asian countries and the ambition to continue playing its role as a (4) “catalyst” for regional cooperation.” Furthermore, Japan has welcomed thousands of Central Asian students and dispatched nearly 3,500 experts drawn from the medical, energy, legal, industrial, and agricultural sectors.

Japan and the EU share a strong and growing relationship as strategic partners, as the EPA, and the SPA demonstrate. This liaison could serve as leverage to increase both the EU and Japan’s impact in Central Asia. While it would be a reach to assume that either party alone rivals the influence that Russia or China wield in the region, together they could maximize their impact in areas of shared importance, such as border management. They would be especially effective in pursuit of their stated goals of forwarding ‘quality infrastructure’ in the EU-Japan Connectivity Partnership, a veiled effort at countering China’s BRI. This push for ‘quality infrastructure’, in fact, would be of immense value if implemented in the CARs, as they are in need of modern hard and soft infrastructure, and would welcome more options in this regard.

Aiming to promote regional stability in Central Asia, Japan and the EU both understand that water insecurity (including the desiccation of the Aral Sea, and the depletion of fresh water resources as a result of climate change) may be a destabilising factor. Both actors also see Afghanistan as a potential source for further instability, with possible ripple effects throughout the CARs. Cooperation in fighting extremism is another common cause, addressed in the annual EU-Central Asia High-level Political and Security Dialogue. In short, individual efforts could thus be aligned and potentially be implemented more effectively as joint projects.

An example of how a joint project could be set up and operationalised between the EU, Japan, and the CARs, would be the cycle of conferences on Tajikistan-Afghanistan Border Management and Cross-border Collaboration (TABMCC, which was held every two years between 2008-2014). Understanding that drug trafficking and weak border control also contribute to terrorism in the region, improvements in these areas have had the effect of cracking down on them. The TABMCC provide a strong blueprint for how the EU and Japan can combine forces with the CARs in addressing these specific challenges.

Furthermore, stronger EU-Japan cooperation in Central Asia may, in the long term, aid in attaining EU objectives regarding human rights and democratic transition. In this regard, Japanese policy makers often make a distinction by framing democratization as a goal of development aid, rather than as a precondition for it. By pursuing these aspirations as a by-product of aid and engagement instead of a condition, the EU could garner some of the goodwill that Japan has accrued in its activities in the region. As it stands, many of the EU’s efforts in this regard have had limited success so far. They may also have been viewed as intrusive by partners such as Russia and China, who are more pressing in importance to CAR actors. Nevertheless, opinion of Japan in the CARs, both at public and policy level, is observed as rather positive. In support of Japan, the CARs have even endorsed Japanese accession as a permanent member to the United Nations Security Council,  as early as 2004.

Finally, both countries should endeavour as closely as possible in working with the CARs on issues the CARs find of importance, rather than pushing their own objectives forward and treating the region as one to be worked on. Currently, the CAJ format has been successful in fostering this positive feeling. The aforementioned TABMCC is another positive example. By providing more open and flexible alternatives to the CARs, without saddling these countries with high indebtedness, the EU and Japan may be able to offer support in areas the CARs find of interest, without asserting overly geopolitical ambitions.