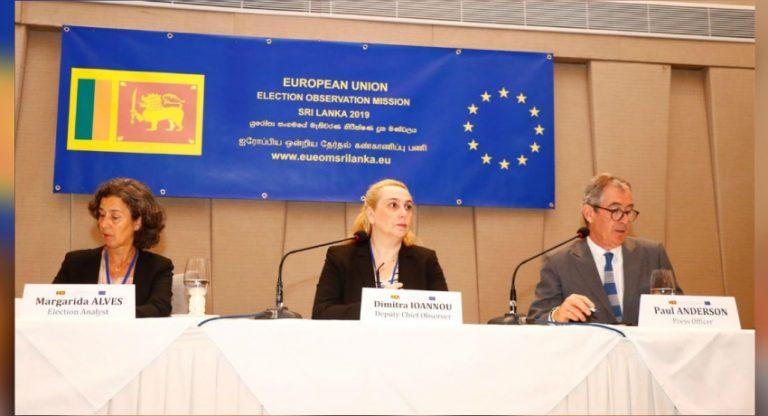 The 2019 Sri Lankan Presidential Election will be the eighth Presidential election. Gotabhaya Rajapaksa from the Sri Lanka Podujana Peramuna (SLPP), a socially right-wing and economically left-wing party rooted in Sinhalese nationalism and social democracy, will run against the main opposition leader Sajith Premadasa from the centre-right United National Party (UNP). Both candidates are frontrunners in the elections and have very different views on the future and progress of Sri Lanka.

Internal conflicts and tensions affected the operations. This was exemplified by functions of the government between Maithripala Sirisena and UNP Prime Minister Ranil Wickremesinghe. The incumbent President decided not to seek re-election and to endorse Gotabhaya Rajapaksa’s candidacy of the SLPP for President instead of a UNP candidate. The strained relations were evident when Sirisena and Former President Mahinda Rajapaksa conspired for him to take office as Prime Minister of Sri Lanka late last year.

Premadasa is expected to be a strong candidate against Rajapaksa. He is the son of former President Ranasinghe Premadasa who was killed in 1993 by a suicide bomber from the Liberation Tamil Tigers of Eelam (LTTE). As a result of the position held by his father, Sajith also enjoys popularity among the rural communities. However, we note the rise of another member of the Rajapaksa family – Gotabhaya. Despite being a frontrunner, he remains unpopular among the Tamil community in the North and East. This is due to his alleged human rights violations during the civil war in his position as Defence Secretary under the reign of his older brother Mahinda.

The Rajapaksa family is widely known for their authoritarian governance style and inclination to holding and exerting a very influential position of power. Thus, it would be undesirable if Gotabhaya would engage in any similar behaviour. Despite the likelihood of such developments, Gotabhaya still enjoys a relatively large support base. He is expected to accumulate more votes endorsed by the economic and societal under-performance of the present Sri Lankan government, which was also demonstrated in the security failures, that contributed to the Easter attacks.

Security concerns are expected to stay acute following the 21 April 2019 suicide bombings claimed by Islamic State, killing more than 250 people. As a result, the strained relations between the Muslim and majority Sinhala-Buddhist community after the Easter attacks calls for a strong leader to handle national security threats and the Islamist militancy. Gotabhaya is expected to make use of his success in defeating the Tamil Tiger rebels in 2009 to support his case and promises to ensure the safety of the Sri Lankan society by engaging in strengthening the intelligence services and to counter Islamist extremism. Gotabhaya will utilise this to fuel the Sinhalese nationalism and rise to the occasion as the strong leader the country needs.

Moreover, Gotabhaya aims to restore relations with China and reinstall a pro-China foreign policy. Thereby, his policies will provide China with the opportunity to establish its Maritime Silk Road Project and acquire a prime location along one of the world’s busiest sea lines. This will be to China’s benefit, even though such an influence accompanied by the dormant rise to power of the Rajapaksa family, may be detrimental to the country. A result of this unfavourable nexus is illustrated through increased foreign debt from infrastructure projects, such as the ninety-nine-year leasing of the Hambantota Port to China.

In light of all the above, the Election Commission of Sri Lanka invited the European Union (EU) to deploy an Election Observation Mission (EOM) in order to observe the Presidential elections on 16 November 2019. The EU has been deploying EOMs for many years, with previous missions to Sri Lanka in 2000, 2001, 2004, 2005 and 2015. Marisa Matias, Member of the European Parliament (MEP) has been appointed as the Chief Observer, along with 30 highly experienced long-term observers posted in each of the nine provinces. This includes 30 short-term observers and a delegation of 7 MEPs, summing the entire mission to 80 members.

The EU Election Observation Mission (EUEOM) is an EU activity which aims to promote democracy, human rights and rule of law worldwide. It seeks to strengthen democratic institutions, build public confidence in electoral processes, help deter fraud, violence and intimidation and works towards other objectives including peace-building. The presence of the EOM contributes to an effort to ensure all processes in the Presidential election to be conducted smoothly and conform to international standards. This includes legal framework support, voting registration, campaigning, (social) media supervision, as well as tallying and counting results. Therefore, the mission will continue to remain beyond the election date in order to monitor and observe further procedures and examine any potential complaints that may arise.

In addition to the institutional crisis and tensions that have been arising among the Sri Lankan Members of Parliament over the past year, a record high of 35 candidates have been nominated for the upcoming elections, which is higher than the previous record of 22 in 2010. The large pool of candidates will not only make the election process costly, but it will also leave much legroom for increased disparities in the projected views for progress and democracy for Sri Lanka. Hence, it is vital for the Presidential elections to be held under the highest level of transparency and honesty. These sentiments were also voiced by the EOM Chief Observer, Marisa Matias, stating that “The presidential election marks an important stage in Sri Lanka’s democratic process and I very much hope our presence will contribute to its transparency”.

The EOM will provide a report prior to and subsequent to the Presidential elections and the procedures will include recommendations for future electoral processes. Finally, it is expected to be an intricate and insightful election, which will undeniably test the strength of Sri Lankan democracy.