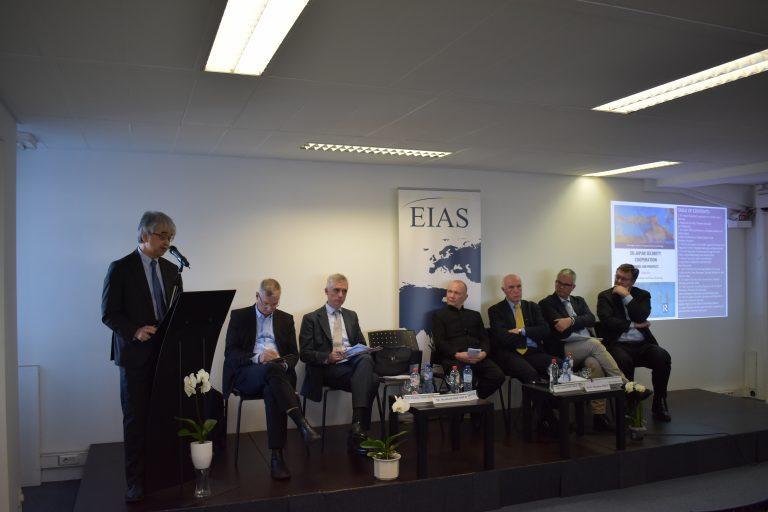 Book Launch: EU-Japan security cooperation developments in light of the EPA and the SPA

On 15 October, the European Institute for Asian studies had the pleasure of hosting the launch of the book “EU-Japan Security Cooperation Trends and Prospects”.

The floor was first given to Prof Dr Emil Kirchner, editor of the book, who talked the audience through the project. The main aim was to scale down what is meant by security from both European and Japanese perspectives, and what are the domestic responses to threats. Mr Kirchner explained that the process of writing the book included pairing Japanese and European researchers in each chapter before two workshops were hosted in Berlin and Kobe, followed by a concluding conference in Brussels, which further enhanced the value of cooperation.

Second to speak was Prof Dr Thomas Christiansen, who started with remarks on the importance of regionalism for the EU and Japan. Both are facing rising geopolitical threats, yet these threats are different in nature – namely terrorism and Russia for Europe and threats posed by China and the DPRK for Japan. Prof Christiansen concluded by emphasizing that both sides need to take each other more seriously outside the field of economic relations, and collectively confront the challenges of the post post-Cold world, overcoming their differences in threat perception and geographical distance.

Prof Dr Thomas Diez was next to present his point. He argued that one should not forget how far the EU and Japan have come, considering that Japan was seen as a threat in terms of trade in the 1970s and 1980s. Nonetheless, the long history of non-cooperation has not clouded the relationship, and the symbolism of the recently agreed economic partnership agreement (EPA) and strategic partnership agreement (SPA) are significant. This is especially the case when one considers the apparent fragility of the multilateral world order.

Next, Prof Dr Jean-Christophe Defraigne outlined the similarities between the EU and Japan. A key similarity is their commitment to the rule-based trading system, which they hope will ensure that another power cannot use military means to assert influence over the global economy. His concluding remarks were that these agreements are not a major game changer if we look from a quantitative perspective, but that they symbolically show that the EU and Japan are not going back to less liberalization.

His Excellency Mr Akira Kono started by congratulating the team behind the book and expressed his view that both traditional and non-traditional security are of importance. HE Mr Kono discussed the little interaction on hard issues with the EU but mentioned that Japan has a keen interest in developing security cooperation and collaboration in EU defence both with the EU and NATO. His key remark was on the strategic importance of free trade, a rule based international order, and values such as rule of law, democracy and the promotion of human rights.

Next Mr Reinhold Brender, Head of Division from the European External Action Service gave his remarks. Mr Brender pointed out that he looks forward to the agreement entering into force. He characterized the EPA as a very strong political statement to the rest of the world. He went further by remarking that even that there is a question mark hanging upon USA’s role in global affairs, the EU does not strive to replace the USA in the region and the focus of the cooperation is not on hard security. Rather, the EU is focusing on complimenting the status quo and cooperating in areas such as maritime security, cyber security, conflict prevention, non-proliferation and counter-terrorism.

Lastly, Mr Goethals characterised the dialogue between the EU and Japan as positive, constructive, and in-depth, remarking that unfortunately the great symbolic significance of the EPA and SPA get too little attention on European soil, as they are over-shadowed by a focus on global populism.

After the concluding remarks, the floor was open to questions by the audience. The topics that prevailed in the debate concerned the relations of the EU and Japan in a global context. Issues touched upon included: the nature of cooperation with regards to the BRI; PESCO; the Iran nuclear deal; and dialogue with the DPRK.

For more information and to purchase of the book, please follow the link: https://www.routledge.com/EU-Japan-Security-Cooperation-Trends-and-Prospects/Kirchner-Dorussen/p/book/9781138315808