The Symbolism of RCEP: Achievements and Geopolitical Implications
Home  /  News 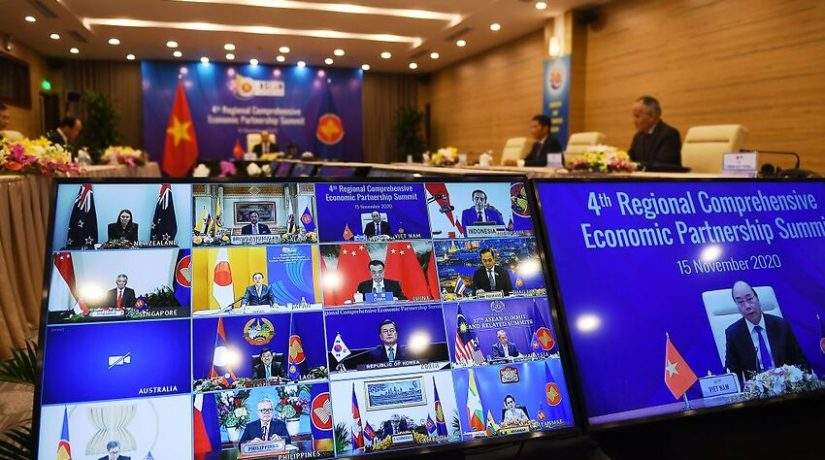 On 15th November 2020, the Regional Comprehensive Economic Partnership (RCEP) was signed between the ten member states of the Association of Southeast Asian Nations (ASEAN), plus five of its FTA members in the Asia-Pacific; China, Australia, Japan, South Korea and New Zealand. As a result, RCEP’s role will serve to ‘formalise existing trade within the region’; and symbolises an ‘achievement of ASEAN-centered regional economic integration’. Finalised after seven years of negotiations, RCEP becomes the largest trading bloc in history, covering roughly 2.2 billion people or 30% of the global population, and a total GDP of USD 26.2 trillion.

An initiative of ASEAN, the idea of a comprehensive trade agreement was first discussed at the 19th ASEAN summit held in Bali in late 2011, with negotiations beginning in 2013. Taking 31 rounds of talks and numerous meetings to reach completion, ASEAN Secretary-General Dato Lim Jock Hoi referred to its signing as a ‘historic event’ in light of regional and global challenges, while Chinese premier Li Keqiang and Indonesian President Joko Widodo both referred to RCEP’s emphasis on multilateralism.

RCEP is an effective amalgamation of the bilateral agreements and ‘ASEAN+’ deals that pre-existed in the region. Its economic success will depend on the extent to which the adverse economic effects of this abundance of free trade agreements (FTA’s) caused by the inevitable adoption of discriminatory trade policies, also known as the spaghetti bowl effect, can be alleviated by RCEP as a broad-based agreement. However, though the agreement might provide some economic benefits, the completion of RCEP can be interpreted as more symbolic than anything else. With this initial deal being welcomed as ‘a victory for multilateralism’ and ‘a stepping stone’ to potentially more far-reaching regional economic integration, it is considered a grand achievement that will aid recovery in light of Covid-19 and the United States-China decoupling.

RCEP will create further trade liberalisation between its signatories, removing tariffs on 90% of goods. Covering typical arrangements such as reducing non-tariff barriers for (and improving market access in) goods and services, RCEP also focuses heavily on areas with economic potential such as e-commerce, aiding the recovery of (and ‘providing some much needed administrative relief for) small and medium enterprises. Technically, perhaps the greatest benefit concerns the establishment of common rules of origin, meaning that the manufacture of a product is given one certification to all 15 nations involved in RCEP. Taking into consideration the trading realities of a post-pandemic world, it ensures that the ‘value of a product is created in the country that exports it’, and products are placed in the same production chain, also preventing re-exports from other countries from less developed nations that also generally have lower standards. This may stand to ‘help RCEP members attract a larger share of global value chains and deepen their specialisation’. As this could reduce export costs, exports could be boosted among signatories by around USD 90 billion on average annually. However, the emphasis on the symbolic impact of RCEP is evidenced further with data from the Brookings Institution, which suggests that the economic effects of RCEP will be largely incremental for its signatories. Brookings cites that by 2030, the GDP of the trading bloc could increase by 0.4% or USD 170 billion, with China seeing a GDP increase of 0.3% and ASEAN members respectively 0.2%.

While not as ‘far reaching or deep’ as other trade blocs based on similar trading arrangements, such as the Comprehensive and Progressive Agreement for Trans-Pacific Partnership (CPTPP), RCEP’s significance lies first in its symbolism, an achievement for multilateralism and the Asia-Pacific region, but also in its geopolitical implications, for which there are many. India (having dropped out in 2019), the United States and the European Union all stand to be impacted in some way by the formation of RCEP. Whilst RCEP is not going to change the face of international trade, the magnitude of its completion lies in that it is a ‘repudiation of protectionism’, and a tribute to ASEAN’s dogged determination to provide some regional integration in a diverse Asia-Pacifc, an achievement when one considers the varying levels of development and differing institutional structures that RCEP signatories hold. The deal practices a mantra of open regionalism. Any party can join as long as the other members agree, leaving it open to enlargement and further engagement with other important actors.

The involvement of China has led numerous Western media outlets to underline RCEP as China ‘led’ or dominated, or even acting as a ‘publicity coup’ for it. Though China, as a member and the world’s biggest exporter, will stand to benefit from further trade liberalisation in the Asia-Pacific region; identifying this partnership as China-centric is inaccurate, and likely driven by viewing the project through the lens of the ongoing Sino-American trade conflict. Rather, the impetus behind RCEP comes wholly from ASEAN, and its signing is a ‘triumph’ of its ‘middle power diplomacy’.  Furthermore, RCEP is a move that lowers dependency on China, as the ‘framework offers supply chains across the Pacific, as global manufacturing reassesses the risks of too many eggs in the China basket’’. RCEP does give China greater diplomatic benefits than it does economic ones. RCEP compliments China’s dual circulation strategy of diversifying its domestic and international markets, and it has symbolic value in that China can now claim to be party to a multilateral agreement of substance.

Comparison to other trading blocs is inevitable, and unlike the CPTPP, environmental standards, labour regulations and mechanisms concerning human rights are not covered in RCEP. There is also concern about the insertion of e-commerce rules, particularly pertaining to the potential abuses concerning personal data, meaning safeguards will be needed to protect from data theft. Beyond this, India’s withdrawal from negotiations in November 2019 highlighted further concerns towards RCEP. As a nation with the world’s second largest population and the sixth largest economy worldwide in terms of nominal GDP, India would be a vital contributor to RCEP. However, the elimination of tariffs and thus potential for what it perceived as a flood of imports was of considerable concern to India, taking into account its fragile agricultural sector which is insufficiently integrated into global supply chains. India also registered apprehensiveness about the perception of RCEP as a China-centric agreement, in particular against the backdrop of India’s trade deficit with China which stands at almost USD 60 billion. Sino-Indian relations remain generally tense, also taking into account recent events at the Galwan Valley border earlier in 2020. Even though RCEP member states remain open to India’s accession, Prime Minister Modi persists with a largely protectionist outlook, having emphasised policies of domestic self reliance throughout his premiership. Indonesia has also reported it expects its trade deficit with RCEP members to reach a total of USD 491.46 million, which mirrors India’s concerns about its suitability for membership. Despite this, current members could support India’s potential accession by engaging with it on specific projects, while an update of the ASEAN-India FTA could be timely.

As a symbolic achievement of Asia-Pacific multilateralism, RCEP does have numerous geopolitical implications, especially concerning the United States. After President Trump’s withdrawal from the Trans-Pacific Partnership (TPP) in 2017 and its subsequent evolution into the CPTPP, the US now lacks membership of both trade blocs that are ASEAN focused. There are concerns in the U.S that closer integration in the region implies that China, as the bloc’s largest economy, will ‘exert influence on regulations and standards setting within the bloc’, and cause the region to become part of China’s orbit. As part of the Obama administration’s ‘pivot to Asia’, a primary motivation to TPP was the intention to counter China’s dominance of the region’s trade by improving economic cooperation with regional allies.

RCEP is also the first trade agreement that has united China, Japan and South Korea. This is an achievement in itself as a result of ongoing tensions and historical rivalries between the trio; and it is hoped that this integration into RCEP could lead to a trilateral FTA. Japan is seen as a particularly key player in RCEP due to its close relationship with the United States. There are perceptions in the United States that having a strong Japan is vital to buttress Chinese economic ambitions, as it remains a major player in the CPTPP and holds numerous free trade agreements with ASEAN nations and Australia. There will be expectations, due to the advent of the Biden administration, that the United States will move to undo the isolationism advocated by the Trump era and rejoin the CPTPP, in part because of Tokyo’s fears that RCEP will drain momentum from the CPTPP. Whilst there is active consideration of how the US can catch up, quick progress on this is not anticipated considering the United States has pressing domestic issues at home, and the fact that CPTPP members may be initially reluctant to renegotiate in order to accommodate them .

Ultimately, RCEP will make it harder for the European Union to play a significant commercial role in the Asia-Pacific. The EU’s largest concern will be the trade diversion caused by RCEP. It is likely that RCEP states will now seek cheaper imports from within the bloc over those from outside it e.g encouraging more Japanese automobile exports rather than from the EU. However, the EU will be keen to continue its engagement in the region, having recently upgraded its relationship with ASEAN to that of a ‘strategic partnership’; though an FTA remains far off due to issues surrounding palm oil and human rights. In the meantime, the European Union would do well to push for a comprehensive Indo-Pacific strategy which underlines its ambition for closer commercial ties and emphasises its role as a normative power; this could be one of the main goals of the French EU Council Presidency in 2022. This would involve closer relations with China; which is well complemented with the completion of the CAI (Comprehensive Agreement on Investment) late last year, making a potential FTA between the two parties not entirely unrealistic. The EU could also choose to push for accession to CPTPP, but this may produce little tangible benefits, due in part to the fact that it already has existing FTA’s with every CPTPP member except Malaysia, Brunei, Australia and New Zealand, and is unlikely to occur anyway due to the complexity of accession.

In this situation, the EU would be wise to follow the example of Japan, who have showcased competent economic diplomacy, having struck trade deals with both China and the US, all while maintaining a security alliance which involves the latter.

Despite its limited provisions on services and investment and the largely incremental effects it will have economy-wise, RCEP would have some impetus to a pandemic hit regional economy, though it is likely to be over a longer period of time. As a consolidation of existing free trade agreements between ASEAN and its partners, RCEP is not a panacea to global trends of protectionism, though it can be perceived as a symbolic ‘stepping stone’ to further ASEAN-led regional integration. Its geopolitical implications reflect a global situation in which India, the United States and the European Union all have concerns, firstly pertaining to RCEP’s perception as China-led, but also to the formation of a trade bloc that they all are not a part of, in an era in which all three regard the Asia-Pacific as a key region of interest. In the long term, the geopolitical impact of RCEP is likely to be as large as its symbolic importance. RCEP will take effect 60 days after it has been ratified by at least six ASEAN and three non-ASEAN signatories, and it is unlikely to encounter any problems at this stage. It would be wise for the European Union to accelerate its presence in the region, enhancing its strategy in a way that underlines its ambitions as a key actor there, as geopolitics and economic recovery in the post-pandemic era look set to be defined by events and participation in the Indo-Pacific theatre.