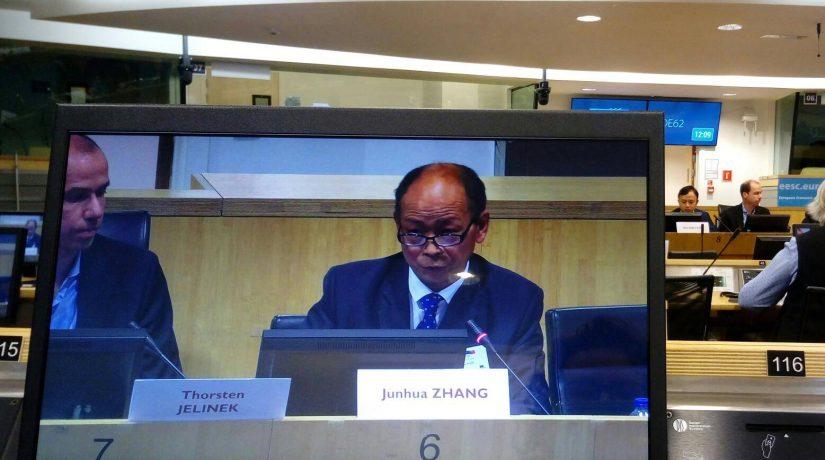 On 11 October 2019, the Conference entitled “The EU-China Digital Connectivity: Opportunities and Challenges” was held at the European Economic and Social Committee in Brussels. The event was organised by the College of Europe and gathered several international academics, professionals and policymakers to discuss the future developments of EU-China digital collaboration, including related security matters.

The conference consisted of three panels, during which speakers deliberated on a variety of issues currently at stake, such as the deployment of 5G technology by Huawei, the growing importance of the digital economy and cybersecurity. Furthermore, a constructive discussion took place on the different perceptions both the EU and China have regarding these specific topics.

Dr Junhua Zhang, Senior Associate at the European Institute for Asian Studies (EIAS), participated in the conference. He highlighted how, for instance, behind the perceived feeling of threat by the EU and its Member States with respect to the Chinese initiatives, there lies a lack of trust towards the Chinese Communist Party and its policies. Indeed, we can observe a different approach taken by the EU compared to the past, composed both of cooperation and competition attitudes, also considering the possible risks represented by Chinese firms and products to the European cybersecurity and cyber sovereignty.

At the same time, we are witnessing a growing EU discomfort towards the United States’ policies and measures against Chinese digital companies. As a result, the most appropriate way forward for the EU seems to start building a single and united cybersecurity policy.

Last May, an important conference was held in Prague, attended by representatives of 32 countries, including the US, Germany, France and Italy, where a series of recommendations in on 5G networks was adopted. These so-called “Prague Proposals” stated that the assessment of the risk of influence on a supplier by a third country (notably China) should take into account its model of governance, the legal environment and other aspects of a supplier’s ecosystem.

In order to prevent the emergence of two disconnected digital worlds, all actors must engage in significant trust-building actions. While the EU should work towards a common cybersecurity policy, Washington should at least partially mutate its fierce approach towards China, whereas Beijing should step up its effort to improve its image abroad, mutating its assertive domestic and foreign policies.