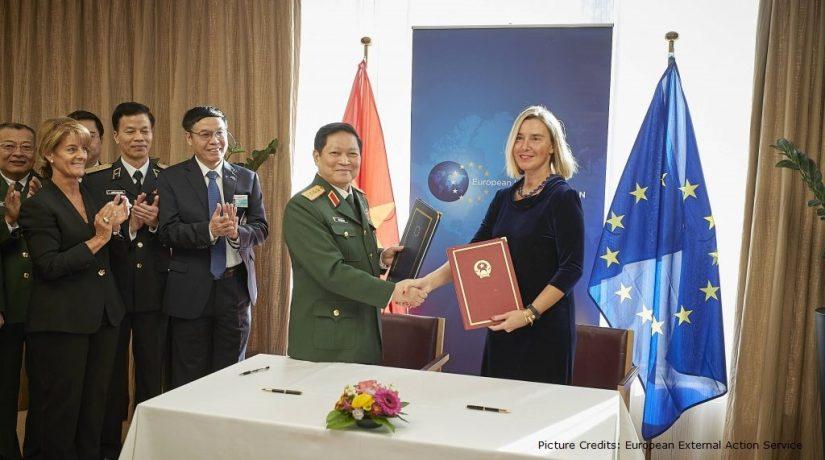 On 17 October 2019, the Security and Foreign Affairs Department of the European Union and the Ministry of National Defence of Viet Nam signed a Framework Participation Agreement (FPA) in Brussels. The Agreement defines the conditions for Viet Nam’s participation in EU crisis management operations, 16 of which are already taking place around the world. The FPA has been concluded as a result of a two-month negotiation process which started with HRVP Federica Mogherini’s visit to Hanoi last August. The Socialist Republic of Viet Nam is the 19th security partner of the EU, the second among East Asian countries after the Republic of Korea and the first member of ASEAN to sign an agreement of this kind with the EU.

The establishment of this partnership is a development welcomed from both sides. Federica Mogherini describes it as a fundamental step forward in the relations between the EU and Viet Nam, as well as in EU-ASEAN relations. Since the signing of the EU-Viet Nam Framework Agreement on Comprehensive Partnership and Cooperation in 2012, Brussels and Hanoi have been building closer political and economic ties. In June this year, the two countries finalised a Trade Agreement that has further strengthened the scope of this mutually beneficial cooperation.

The signing of this FPA shows that the EU and Viet Nam also share the commitment to maintain peace and security, not just in their respective neighbourhoods but also in the broader world. On one hand, this partnership reflects the growing European engagement with and in Asia, the increasing importance of Southeast Asian countries on the global stage and consequently the rising centrality of ASEAN as a regional institution. On the other, it shows once again the dedication of the Vietnamese government to promote multilateralism in international economics, politics and security, as well as the desire to further diversify the country’s international partnerships.

This Framework paves the way to Viet Nam’s greater role in the established international mechanism for global peace and security, scaling up its cooperation with UN Peacekeeping Organisations. The Agreement establishes regular consultations on security and defence matters between Brussels and Hanoi – allowing Viet Nam to gain an improved access to EU training and capacity building activities, as well as easing information exchange within the framework of Common Security and Defence Policy (CSDP) missions and operations. In view of this agreement, Vietnamese personnel and forces will be able to contribute to EU civilian and crisis management operations, enhancing military cooperation and exchange not just between Viet Nam and the Union but also with EU Member States. This FPA also sets the stage for other ASEAN members which are already close economic partners of the EU – such as Singapore, Thailand, Indonesia and the Philippines – to follow Viet Nam’s example and broaden the scope of their bilateral cooperation with the EU to the security realm.

With regards to the European perspective, the conclusion of the EU-Viet Nam FPA further displays the EU’s commitment to enhance its position as a global security provider. As stated in the 2016’s Global Strategy for the European Union’s Foreign and Security Policy, high priority in the EU external action is accorded to security and defence, as well as to the support of a rule-based and cooperative global governance. The EU-Viet Nam FPA brings these two commitments together, showing that the Union is determined to scale up its proactive role in global security – and to do so by broadening its existing cooperation partnerships within the framework of international law.

Over the last few years, security has played an increasingly important role in EU-ASEAN relations, with the Union becoming more engaged than ever in Asian security and ASEAN acting as a major promoter of and respondent to this engagement. The two regions have been enhancing their security partnership, particularly by scaling up their cooperation to encompass traditional and non-traditional security matters. Maritime security, disaster management and crisis response, along with transnational crime and crisis management, have been identified as priority areas in the enhanced partnership. Several milestones for inter-regional security cooperation have been reached so far. Among these, the organisation of four EU-ASEAN High Level Dialogues (HLDs) on Maritime Security Cooperation, and the EU’s co-chairing of security-related meetings of the ASEAN Regional Forum (ARF) stand out as particularly relevant developments. The Meetings on Counter-Terrorism and Transnational Crime, as well as the current co-chairing with Viet Nam and Australia of the Inter-sessional Meeting on Maritime Security are to be noted in particular.

With its participation in and contribution to the EU’s CSDP missions, Viet Nam has been at the forefront of ASEAN as the launcher of closer inter-regional security cooperation. With Hanoi taking over again the ASEAN Chair in 2020, as well as a non-permanent seat at the United Nations Security Council for the period 2020-2021, stronger EU-Viet Nam relations have the potential to be central to boosting global integration. In light of these developments, it is expected that a closer cooperation for global security will be a central tenet of the upcoming EU-ASEAN Strategic Partnership.