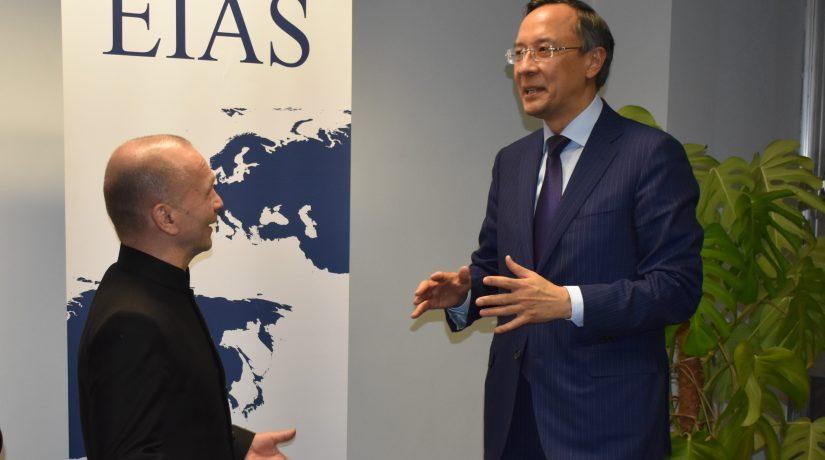 On November 22 and 23 Foreign Affairs Minister of Kazakhstan, Kairat Abdrakhmanov paid a working visit to Brussels. The visit’s agenda focused on energy issues, the renewal of the EU – Central Asia Strategy, and Kazakhstan’s emerging role as a regional, interregional and global actor. Mr Abdrakhmanov was joined by Her Excellency Ms Aigul Kuspan, the Ambassador of the Republic of Kazakhstan to the Kingdom of Belgium in his visits to the International Energy Charter and to the EIAS.

International Energy Charter visit
First stop of Mr Abdrakhmanov was the International Energy Charter where he held a working lunch with its Secretary-General Dr Urban Rusnák. The discussion concentrated on the state of affairs around the Energy Charter Treaty and its upcoming modernization. The Energy Charter promotes energy security through open and transparent energy markets and as such is an essential legal framework for the energy investments between Kazakhstan and the EU. The Minister acknowledged that membership in the Energy Charter allows Kazakhstan to participate in international dialogue on trade, transport and transit of energy and it contributes towards a better climate for investments in Kazakhstan’s energy sector. This discussion is central on Kazakhstan’s agenda, as one of its one hundred concrete steps towards the Kazakhstan 2050 Strategy is to attract strategic investors into the energy industry.

Ergo, Mr Abdrakhmanov characterized the Energy Charter as of utmost importance against the backdrop of growing global disagreements, positively evaluating the modernization of the Charter Treaty. The Minister raised the issues of promotion and protection of investments, settlements of investment disputes, and issues on transit of energy resources.

Consequently, the Energy Investment Risk Assessment was touched upon, which pinpoints risks and policy gaps affecting energy investments in the country. In the case of Kazakhstan, issues identified covered the nature of the regulatory effectiveness and the state of respect for property rights. Lastly, Minister Abdrakhmanov stated Kazakhstan’s interest in expanding energy cooperation with the European Union.

Meeting with the High Representative Ms Mogherini
Next on Mr Abdrakhmanov’s visit agenda was a meeting with the High Representative of the Union for Foreign Affairs and Security Policy, Federica Mogherini. Ms Mogherini acknowledged the high level of trust between the EU and Kazakhstan and the further deepening of interaction between Brussels and Astana due to the political and administrative reforms taking place in the latter. The three main topics discussed were EU – Kazakhstan bilateral relations, EU – Central Asia Strategy, and cooperation and international issues.

Firstly, as a priority Mr Abdrakhmanov outlined the completion of the ratification of the Enhanced Partnership and Cooperation Agreement between Kazakhstan and the EU, since they are still 5 countries left to complete the ratification process. Next, the EU was recognized as the biggest trade and investment partner of Kazakhstan. Mr Abdrakhmanov advocated for the increasement and comprehensive diversification of trade as a necessary further step in the bilateral trade relations in the coming years.
Lastly, both Ms Mogherini and Mr Abdrakhmanov noted the constructive dialogue during the 10th Human Rights Dialogue and 16th Subcommittee on Justice and Home Affairs that took place in Brussels on 20-21 November.
On the issue of cooperation between Central Asia and the EU – Kazakhstan noted a key foreign policy priority in the face of development of constructive dialogue between the two regions. The renewal of the now 11-year-old EU – Central Asia Strategy is warmly welcomed. As demands, possibilities, and geopolitical realities throughout the region have changed, and with relations in Central Asia undergoing a new momentum, the EU’s engagement with the region needs to keep pace. Hence, Kazakhstan prepared and provided their vision for the new Strategy, presented in the following key points:

Thirdly, international issues were discussed between Mr Abdrakhmanov and Ms Mogherini. The Minister indicated the importance of Kazakhstan’s participation in the United Nations Security Council as the first country from Central Asia to do so, for the representation of the region’s interests. Special attention was given to the situation in Afghanistan and its overarching influence over the stability of the region. Ergo, the stability and security in Central Asia are unsustainable without including Kabul in the dialogue. Lastly, concerns such as counter-terrorism and stability in Syria were placed on the agenda.

In his speech Mr Abdrakhmanov stated Kazakhstan’s great interest in the Strategy and discussed at length Astana’s vision for its renewal. First and foremost, such a strategy should consider the region’s growing capabilities and changing realities compared to 11 years ago. Subsequently, the success will be determined by adopting more flexible tools for the practical implementation of the Strategy, increasing its visibility, and safeguarding the integrity of cooperation in the EU – Central Asia format.
The main concrete proposal made by the Minister for executing the points above, is the creation of a single, multifunctional online portal for increasing the interaction and the visibility between the two partners. Numerous things related to bilateral cooperation may be included such as, but not limited to: a calendar on all the events related to EU efforts in Central Asia, a bulletin board for business projects and section for startups, information the ERASMUS educational program for Central Asian prospect students, visa information etc.

The Minister also noted the faults of the envisioned document. Namely, the little regard given to the major economic initiatives in the regions – the Eurasian Economic Union and the Belt and Road Initiative. It was suggested that deeper attention should be given to these initiatives in the upcoming Strategy.

A few notable announcements were made after the Ministerial meeting. First, the EU will launch a €124 million set of regional programmes for Central Asia aimed at the encouragement of private sector development, environmental protection and promotion of the rule of law.  Second, Brussels and Tashkent started negotiations for an Enhanced Partnership and Cooperation Agreement following the request made by the new Uzbek leadership under President Mirziyoyev. Thirdly, the EU is about to open a delegation in the only country in Central Asia, still without one – Turkmenistan.

Visit to the European Institute for Asian Studies
Finally, the European Institute for Asian Studies had the pleasure to welcome Mr Abdrakhmanov where he conducted a meeting with representatives from Kazakh media. The journalists were in Brussels as a part of a press tour organized by the European Union, in order to familiarize themselves with the work of the EU institutions, the renewal of the EU strategy for Central Asia, and for attending the Foreign Ministers’ EU – Central Asia meeting. Special attention was given to the role of the media in the implementation of public diplomacy and the rapprochement of peoples and cultures.

Subsequently, Foreign Minister Abdrakhmanov gave a conference in the Institute in which he elaborated on the they key priorities of Astana’s foreign policy agenda.

He started by emphasizing that Kazakhstan is undergoing a very important period of development. New levels of cooperation have begun with both the region and the EU, which Astana sees as an equal and reliable partner. In his words, Central Asia is one of the most dynamically developing regions in the world and its geographical position is strategic not only from a regional perspective, but also from a global one.
The Minister stated that the development of human capital through education is a primary concern of the socio-economic modernization of the country. As President Nazarbayev has also stated, human capital is the foundation of sustainable economic development and a major drive forward for innovation and modernization. The EU has been recognized as a partner in this large-scale project and as stated, new educational programmes have been agreed upon.

Another sector with great prospects but with unfulfilled potential remains Kazakhstan’s SME sector. Barriers to full capacity development include: corruption – which leads to perceptions of unreliability of Astana; little incentives for female entrepreneurial businesses; and small-scale digitalization. Consequently, Astana would like to work with Brussels on the removal of those barriers through increasement of transparent dispute settlement in business projects, stimulation of women’s participation in business development through trainings and undertaking an effort towards digitalization. A step towards achieving all these necessary reforms is the creation of a business council, giving European companies information about the investment opportunities and potential in Central Asia, Mr Abdrakhmanov said.
Next, the Minister outlined that despite Kazakhstan’s vast resources of coal and oil, the country is seriously turning its attention towards solar, biomass, hydro and wind energy, as by 2050, half of the country’s total energy consumption is planned to be generated by renewable and alternative sources.

On the issue of Afghanistan, Kazakhstan strongly advocates for reevaluation of the perceptions of Kabul. Whilst it is currently understood as a terrorist, extremist and radicalist threat, Kabul should be seen as a partner in the region, necessary for its prosperity, growth and stability. Astana reaffirmed and worked towards this view numerous times through its work as a member in the Security Council. To exemplify, in January 2018, the Security Council conducted a weekend mission to Afghanistan, where it the delegation held meetings with senior officials, including Afghan President Ashraf Ghani and Chief Executive Abdullah Abdullah. The delegation also met with the leadership of the UN Assistance Mission in Afghanistan and the Resolute Support Mission of NATO.

Following this, Mr Abdrakhmanov reaffirmed his opinion expressed during the Ministerial meeting that the Kazakhstan invites the EU to take a more proactive role in cooperation with the Eurasian Economic Union and the Belt and Road Initiative, as this will facilitate more overarching connectivity between Asia and Europe. Additionally, it is beneficial for the region in terms of diversification of trade.

The Chief comment made by the Minister was that the Central Asian market is stable, predictable, modern, open and united like never before. Against the backdrop of trade wars, the Central Asian market should not be underestimated by European investors. Consequently, the central aim of the government in its mission to the Security Council is to show that the region is investment worthy. To back this claim up, numerous administrative, political and judicial reforms have taken place with the help of the EU through inter-parliamentary meetings, and subcommittee meetings on justice and home affairs and human rights.

Final points were made on the support for Uzbekistan’s quest towards Enhanced Partnership and Cooperation Agreement, the expressed desire for the simplification of visa processes for the Schengen area, further support for a multilateral EU – Central Asia – Russia – China – USA meeting on the questions of trade, terrorism and security.

To conclude, Foreign Minister Abdrakhmanov’s visit and comments further reaffirm Kazakhstan as a country that sees itself with roots both in Asia and Europe. It’s multi-vector foreign policy approach can be observed in its advocacy for interaction between the numerous actors and economic initiatives active in the region. Astana’s aspirations to have a seat at the table of global politics are evident in its chairing of the OSCE in 2010, its membership in the Security Council of the United Nations in 2017 – 2018 and its 2050 Strategy that calls for positioning Kazakhstan as one of the 30 global economies by 2050.