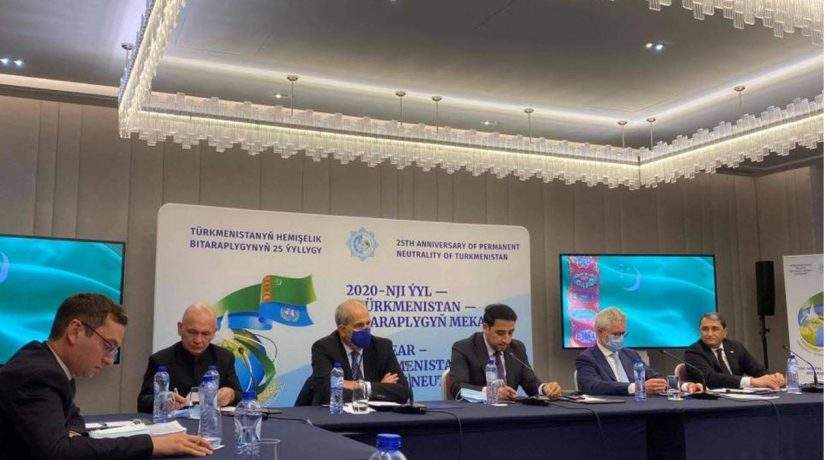 On 25 September 2020, H.E. Tchary Atayev, Ambassador of Turkmenistan to the Kingdom of Belgium and the European Union, hosted a high-level roundtable under the title ‘Constructive Dialogue for Peace and Sustainable Development’ on the occasion of the 25th anniversary of the country’s Permanent Neutrality Status.

After some brief historical context, the Ambassador highlighted the initiatives undertaken by Turkmenistan to provide peace, stability, and cooperation in the region, as part of its foreign policy of neutrality.

Guest speakers included the Ambassador of Afghanistan as well as representatives from the European External Action Service, Energy Charter Secretariat, and European Institute for Asian Studies. Following Ambassador Atayev’s speech, the discussants were invited to share their personal views on the country’s progress.

Mr Axel Goethals, CEO of EIAS, emphasised the constructive engagement that his think tank has maintained with Central Asia over the last decade. In particular, he suggested some key sectors in which closer cooperation between the EU and Turkmenistan would be highly beneficial: notably in the chemical industry, glass industry, textile, energy and education.

On the other hand, Mr Alberto Turkstra, EIAS Programme Director, recapped the achievements made by the Turkmen government in a variety of areas since its independence in 1991. Regarding the peace-building field, the role played by Ashgabat in hosting peace talks for its neighbours, especially during the Tajik civil war and the intra-Afghan conflict in the 1990s, was stressed. With respect to sustainability, the administration’s commitment towards the preservation of the Aral Sea region coupled with its on-going support of the European Green Deal agenda, was underlined. In addition, Mr Turkstra pointed out the importance of energy and infrastructure connectivity projects as a provider of regional stability. In particular, the Lapis Lazuli Corridor and the TAPI pipeline were mentioned as two major undertakings where regional cooperation has been and remain crucial.

In general, participants have noted the growing bilateral relations between Brussels and Ashgabat since 2017. The recent opening of a full-fledged delegation in the country in 2019, along with the visit of former HR/VP Mogherini, represents a testament to this trend. Particularly active in three areas, namely education, public administration and agriculture, the EU supports Turkmenistan’s strategy of neutrality while recognising its stabilising role in the region.

Eventually, the roundtable, which featured other distinguished guests such as the respective Ambassadors of Kazakhstan, Uzbekistan, Tajikistan, and the Kyrgyz Republic, concluded with a networking event and the opportunity to taste the national dish, the Turkmen plov.