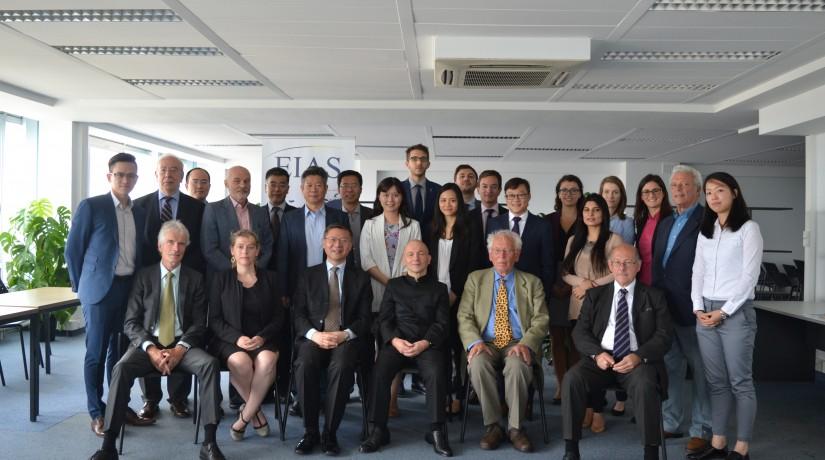 On July 6 2016 EIAS had a pleasure to host Prof. Zhang Weiwei from Fudan University for a closed-door talk on the topic of “The China Model: Implications for EU-China Relations”. Prof. Weiwei’s keynote speech was followed by an exchange of views between the senior representatives of EIAS and European Institutions and the delegates from  Fudan University. The discussants focused primarily on challenges which the EU and China are currently facing in relation to their respective governance models and enjoyed a fruitful debate featuring a number of interesting remarks.

The delegation from Fudan University led by Prof. Zhang Weiwei was vividly interested in the issues currently shaping the European political landscape. For instance, with the migration crisis (framed in relation to the human rights protection) or Brexit with related topics of common European values or the concept of democracy itself. Through these topics the guests sought to tackle the questions of ‘good governance’ and provide a new context for the debate on the comparison of the Western Model and China Model.

The participants representing EIAS and the European institutions addressed the issues raised by the guests by putting forward their respective opinions on the current situation in Europe, its sources and future prospects. In relation to the governance model some of the participants pointed out the requirement of transparency for the governments to be able to connect with the societies they govern. Moreover, they stressed the significance of the Joint Communication to the European Parliament and the Council “Elements for a new EU strategy on China” released by the European Commission and the High Representative in June 2016.

A reappearing topic was the discussion about the normative aspect of the Sino-European cooperation. Both sides sought to tackle the problem with many propositions and perspectives being put forward: ranging from the “impossibility to negotiate the values”, through a concept of “seeking consensus”, up to an idea of “searching for common rather than universal values”. The view held by most of the participants was that there is a clear merit in exchanging the views and learning from each other in order to better tackle the problems of one’s respective region.