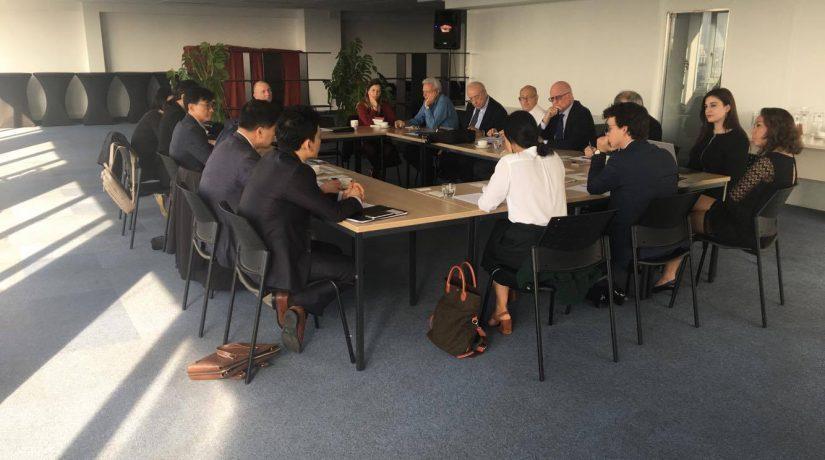 EIAS had the pleasure to welcome an honourable Delegation from the Ministry of Unification of the Republic of Korea for an informal expert roundtable discussion on 25th September 2017. The Korean delegation was headed by the Director-General, Inter-Korean Dialogue Planning Department, Office of Inter-Korean Dialogue, Ministry of Unification, Mr. Park Chul. The EIAS put together a diverse panel of expert discussants that included the institute’s senior associates and younger researchers, representatives from the European institutions, former ambassadors and the Brussels think-tank community. The informal roundtable addressed the European and Asian approaches to human rights and exchanged constructive know-how on establishing and upgrading Human Rights Dialogues, for which the EU has been a vocal proponent.

Mr Axel Goethals,  CEO of EIAS, introduced the in-depth research projects carried out by the institute on both the process of enforcing the flagship free trade agreement between the EU and South Korea and its aftermath, as well as the current tensions on the Korean peninsula. With trade and human rights dimensions closely intertwining, the EU’s human rights dialogues with third parties shed light on negotiation processes and the actual unravelling within the broader framework of Free trade Agreements and Strategic Partnership Agreements.

Considering that both human and economic rights are being severely threatened in North Korea, a particular point of concern discussed was the rights of vulnerable groups and family reunion mechanisms. The EU’s diverse and profound experience in human rights, family reunification, migration and security served as a constructive foundation for the exchange of good practices. With little room for a new interpretation of the “Sunshine policy” and re-entering into economic projects to facilitate the reconciliation between the North and the South, the current reunification model would be that of reunification by the people. In other words, anticipate the moment when the economic stature of the North rises to the same level as the South and then the people on both sides of the 38th parallel can decide on whether, when and how to reunite. This could only happen, however when there is a tangible de-escalation of the current tensions.

The South Korean delegation provided invaluable insights into the state of North-South relations with the critical engagement mode being in suspension ever since 2015. The DPRK would need to stop its aggressive actions and engage with dialogue. Military interventions are not a viable option. The recent additional UNSC sanctions on the North Korean regime underlined that the path from armistice to peace treaty would have to go through multilateral mechanisms. The regional powers would have to take a particularly active stance in the peaceful resolution of the escalating conflict. A very opportune dialogue could include the EU, China, North Korea and Japan in mobilization of regional cooperation instruments. Some setbacks have however already been registered with the EU special rapporteur for DPRK making it to as far as Seoul with access to DPRK being denied.

The European representatives and the honourable delegation concluded that there is a high level of interest and a broad knowledge base on both sides of the developments on the Korean peninsula. What was more important to identify was the very similar position and understanding of human rights between South Korea and the European Union. Now it would simply be a question of exerting greater synergy in peace and dialogue initiatives.