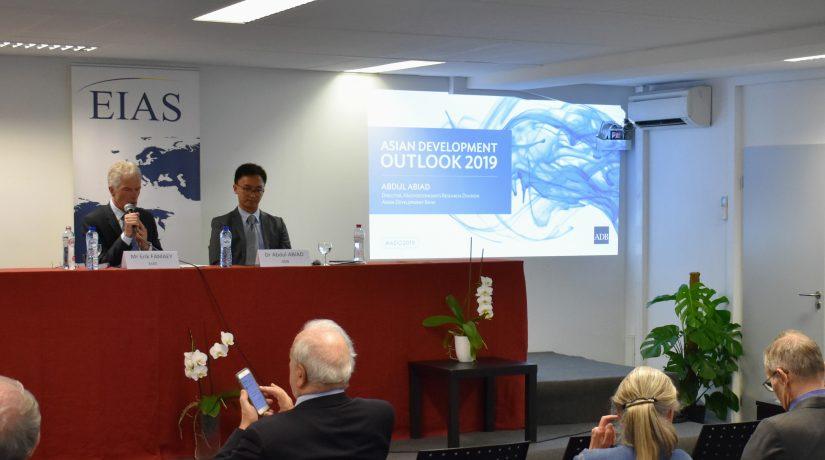 On 9 April, the European Institute for Asian Studies had the pleasure of welcoming Dr. Abdul Abiad, Director of the Macroeconomic Research Division at the Asian Development Bank (ADB), to share his insights on the ADB’s latest flagship publication, the Asian Development Outlook 2019 (ADO).

To get the event underway, Mr. Erik Famaey, Senior Associate of EIAS, gave a welcoming speech, briefly introducing Dr. Abiad and the work of the ADB. He pointed out that reports produced by the ADB, IMF, and WTO share one similarity: they all reference the adverse pressure on the world economy. In relation to this point, Mr. Famaey cited how globally 70 per cent of the economies are experiencing lower growth. Also, the persistent uncertainties surrounding policy – especially from the US – have a negative impact on the world economy, an issue which came back throughout Dr. Abiad’s presentation.

Before giving the floor to Dr. Abiad, Mr. Famaey identified one key feature of the ADOs, their in-depth focus on one particular topic deemed to be of particular, contemporary relevance. In this year’s report, this topic emerges as the region’s disaster resilience. According to the report, investing more money on disaster prevention is believed to not only reduce disaster risk but also better protect the people at risk.

Getting his presentation underway, Dr. Abiad started by introducing the outlook for developing Asia (all Asian countries excluding Japan, Russia and Turkey), with growth throughout these 45 countries predicted to slow down to 5.7 per cent in 2019 and 5.6 per cent in 2020. One of the main causes of this decreasing growth is the weakened demand in the global market. In particular, the aggregate growth of major industrial economies – United States (US), Eurozone, and Japan – decreased from 2.3 per cent in 2017 to 2.2% in 2018. This has a negative impact on regional exports in 2018, which witnessed a contraction when compared to 2017’s figures. As a result of this, exports were unable to generate as much economic growth as in previous years. Dr. Abiad also showed that open and outward-oriented economies tend to be affected more by the slowdown of global trade and activity. For example, most economies in East Asia and Southeast Asia will suffer a lower growth rate in 2019.

However, according to Dr. Abiad, even though the slowing down of global trade and activity will continue to put pressure on the economies in the region, their overall GDP growths remain strong. This is mainly due to the domestic demand staying strong and supported economic growth in the region. Based on the data collected by the ADB, most developing economies in the region experienced an increase in total consumption, and “on average, consumption contributed 3.7 percentage points to overall growth in 2018, up from 3.4 percentage points in 2017”.

After presenting the outlook, Dr. Abiad drew a comparison between the two biggest economies in the region: the People’s Republic of China (PRC) and India. He argued that the two economies show relatively divergent growth paths. When it comes to the PRC, he sees growth continuing to moderate from 6.8% in 2017 to 6.6% in 2018. The government is currently attempting to structurally shift the economy away from industry to services; however, the growth in services is not big enough to offset the decrease in industry, which is one main reason for the decrease.

As for India, its domestic demand, especially private consumption, remains strong and functions as the main driver to the growth. Moreover, India is cutting policy rates and providing farmers with more income support, which is likely to further boost economic growth in 2019.

On top of this assessment of growth rates, Dr. Abiad also discussed inflation in the region. He stated that after a small increase in 2018, inflation is likely to remain stable at 2.5 per cent for the next two years, a relatively low figure in comparison to the 10-year average of 3.2 per cent. There are two main reasons that are likely to ensure that inflation will remain at this level. One is that the oil prices are likely to “stabilise at lower levels”. The other is that food prices are only going to slightly increase in 2020.

Later, Dr. Abiad looked into the details of the ongoing trade conflicts, particularly the one between the US and the PRC. He summarized how the trade conflict evolved in 2018, initially starting at a global level as the US imposed tariffs on most of its partners, before becoming more bilateral, taking place predominantly between the US and the PRC.

For the time being, both the US and the PRC agreed not to further escalate the conflict. Under the current scenario, the major victims are the US and the PRC, with the PRC suffering a larger impact. The global effects, however, are relatively small and can be offset by redirection of trade and production, such as moving factories to Vietnam.

At this moment, Dr. Abiad and his colleagues are concerned that the conflict is going to keep escalating. The worst case is that the subject target will include cars and auto parts. As two of the three – the other one being Germany – main global manufacturing hubs, the US and China will “potentially disrupt the existing network of global value chains” and “reduce global production and trade activity,” if they cannot avoid further escalation. Uncertainties continue to exist throughout the prolonged negotiations between the two parties.

After Dr. Abiad’s presentation, the floor was open to questions from the audience. When asked about the impacts of technological progress on economies, Dr. Abiad claimed that new technologies generate more jobs than they destroy, with these jobs generally not having existed previously. When asked about the regional connectivity of Asia, Dr. Abiad agreed that improving connectivity within the region is going to increase the intra-Asia trade and make the region more resilient.

In conclusion, Mr. Famaey thanked Dr. Abiad for his precise and concise presentation and concluded that looking ahead, despite some concerning global trends, the future looks bright for the economies of Asia.