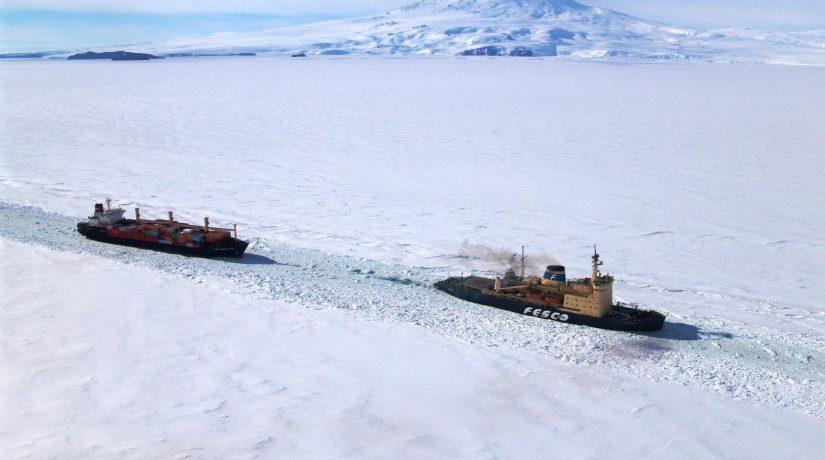 In June 2020, a new all-time high temperature record in the Arctic was set, which reopens the debate on the importance of fighting climate change on one hand, and navigating commercial Arctic shipping routes and raw materials extraction in the area on the other hand. Logistical opportunities offered by the thawing land derive from the rising temperatures, while the shrinking frozen zones improve the accessibility of the Arctic shipping routes, and possibly, even the accessibility of its resources. Intensifying commercial shipping through international Arctic waters and Russia’s Exclusive Economic Zone (EEZ) may be within easier reach than initially thought. The Arctic should unambiguously be considered as an upcoming centre of international freighting development and strategic geo-economic interests, instead of a flagship of cold isolation. 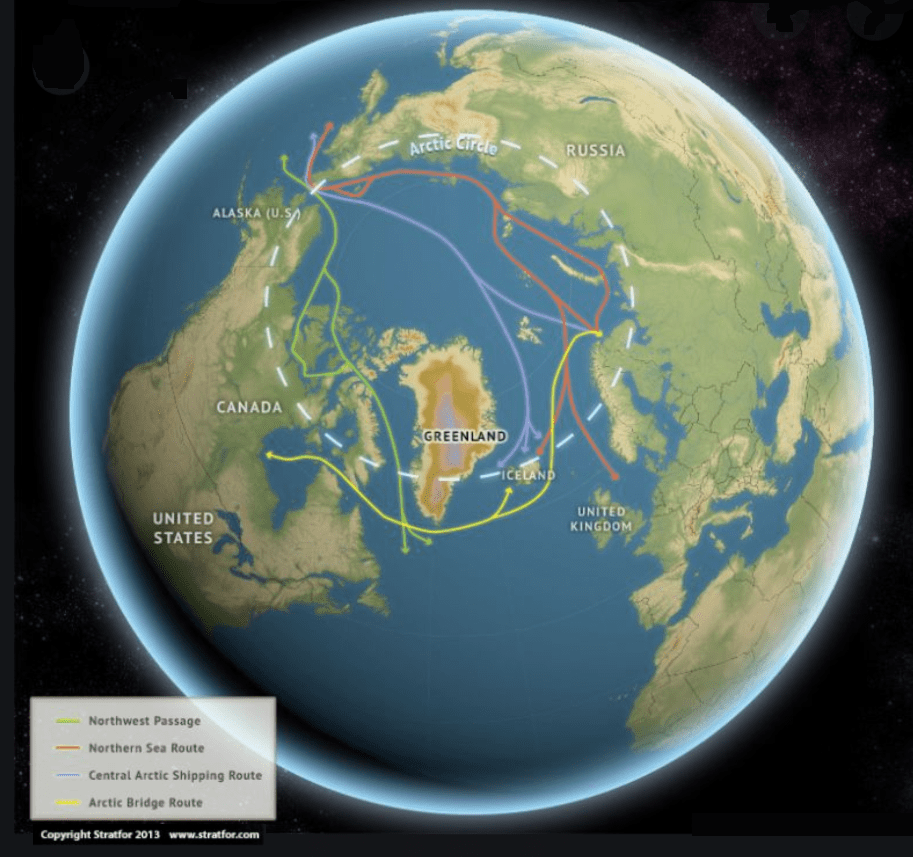 Several possible shipping routes are available for international maritime transport development through the Arctic. The Arctic shipping routes and maritime lanes are mostly used by tankers navigating through the Polar region. The ones currently in place are the Northeast Passage (NEP), Northwest Passage (NWP) and the Transpolar Sea Route (TSR). On top of that, the Northern Sea Route (NSR) forms a significant part of the NEP, starting at the Kara Strait, ending at the Bering Strait. Additionally, the Arctic Bridge shipping route connects North America with Asia, starting in Murmansk and ending in the Hudson Bay, which has not been in use for over a decade. The shipping routes are shown in the figure.

Due to their geographical location the NEP and the NSR are the most promising Arctic sea routes for commercial EU-Asia maritime transport. International maritime traffic on the NEP and the NSR is increasing. Although traffic on the NSR is mainly Russian, it reveals the route’s significance and potential, if there is an economic driver. More frequent and protracted ice-free periods per year make the future of the NSR look much more feasible than before. The NSR is 7,200 nautical miles long, which is 37% shorter and 40% faster than the commercial route via the Suez Canal. Navigating the NSR instead of these commercial routes could not only significantly reduce the burden of the Malacca Strait and the Suez Canal, or the duration of intercontinental EU-Asia maritime transport and logistics, but also enhance energy security by avoiding the heavily pirated Strait of Malacca and Horn of Africa, all at significantly reduced fuel costs.  China’s interest in this shipping route is also related to its efforts to cut its reliance on Middle Eastern energy supplies and increasing its focus on Russian supply.

China’s Vision for Maritime Cooperation under the Belt and Road Initiative (BRI) states that closer cooperation between ‘relevant countries’ will be carried out to enhance the international transportation’s market environment and to facilitate maritime transportation. In January 2018, China published a white paper called China’s Arctic Policy. Regarding logistics the policy outlines China’s approach on infrastructure development and the Polar Silk Road (PSR), which covers the mentioned trade routes and helps expedite shipping delivery. In this paper China proclaimed to be a near-Arctic state, which indicates that these ‘relevant countries’ are likely to consist of the eight member states of the Arctic Council, namely; Canada, Denmark, Finland, Iceland, Norway, Russia, Sweden, United States of America, plus China.

Although making use of the NSR seems like an economically viable idea at first glance, trading hubs along the Russian coast have been severely neglected since the fall of the Soviet-Union. Letting these Soviet-era backwaters breath again will need profound financial stimulus, something which is not likely to be prioritised by Moscow anytime soon. China’s ambition, however, brings in the potential impetus of its BRI. On 25 April 2019, at the second BRI International Forum in Beijing, Vladimir Putin stressed that close cooperation with Eurasian countries is required for the development of the NSR, as investments are needed to build port terminals and logistic centres, hinting towards the NSR’s potential of becoming a part of China’s PSR under the BRI.

Assessed from a European perspective, none of the Scandinavian countries are active participants in the BRI and official statements on the receptivity of these countries respecting infrastructure investments have not been made. The EU engages in various international organisations, funding programs and forums related to the Arctic and its governance. The key areas of attention are devoted to fighting climate change, safeguarding the Arctic environment, regulation of fisheries, sustainable development, search and rescue capacity, innovation, and science. Remarkably, intercontinental shipping and logistics are not among those. According to the Scandinavian Institute of Maritime Law, the reasoning for that might be the EU’s preference of avoiding controversial policies, such as those related to Arctic shipping. Besides that, the EU finds itself in a situation of adhering to its bilateral relationships with key Arctic states. The fact that none of the EU Member States is bordering the Arctic region limits the EU’s jurisdiction to take legislative or enforcement measures in the region under UNCLOS. Considering these measures being at the core of the EU’s reason not to interfere or make a specific statement on the region, it is noteworthy that seven EU Member States have a seat on the Arctic Council. When it comes to internationally shipping, these countries are not allowed to engage in any international act that would affect existing European Union law, as it is follows the principle of primacy, the so-called ERTA-principle.

According to the Chinese Vision for Maritime Cooperation under the BRI, China is ‘‘willing to work with all parties (…) in the Arctic, supporting efforts by countries bordering the Arctic in improving marine transportation conditions, and encourages Chinese enterprises to take part in the commercial use of the Arctic route’’. Considering that ‘all parties’ has been slimmed down to Russia, scaling up the utilisation of the NSR is therefore in the hands of Russian partnership or in those of private and state-owned companies in the field of maritime logistics. Several uncertainties contribute to these shipping companies sustaining a reluctant attitude on diving into the frigid Arctic waters. Ships are said to have to move slower as the water might still be icy when it is not frozen. Unpredictable shipping times make just-in-time cargo more risky, and the shallowness of some parts of the NSR make it unsuitable for the usage of huge container ships which are able to navigate the classic sea routes.

Due to Russia’s selective engagement in cooperating with western countries after sanctions related to Crimea and the conflict in Ukraine since 2014, China is clearly its most important partner in shaping projects in the Arctic.

In conclusion, the EU has no specific nor official logistical strategy, nor drive to focus on the NSR in the near future. Besides this, international maritime companies find it too daring to commercially navigate the Arctic routes at this point. China, on the other hand, seems to prioritize its energy supplies and accessibility over maximising the potential traffic in the Arctic. Furthermore, actual Arctic maritime logistics for other purposes than the transportation of LNG or other raw materials seems to be a distant reality. Opening the NSR for commercial shipping in a viable way and making it a competitive transport route appears to remain a sheer Russian dream for now.