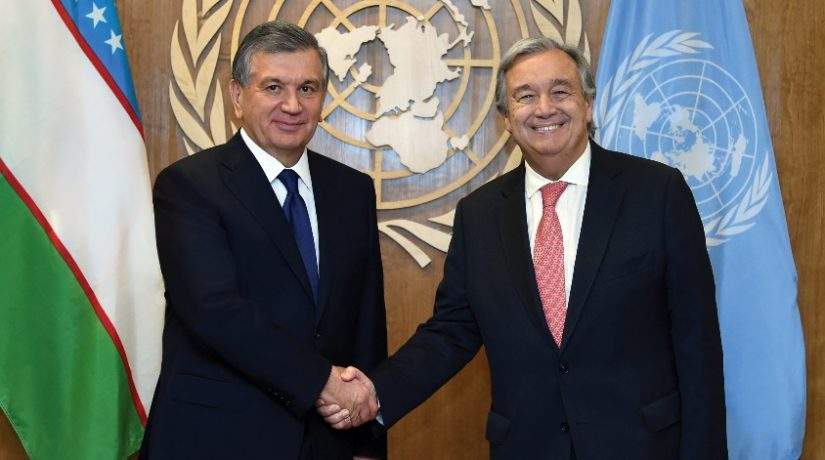 This year, the corridors of the UN Headquarters in New York will be largely empty and silent. The conditions around COVID-19 dictate that the UN General Assembly – the most high-profile UN event of the year – will be a mostly virtual affairs this year. Yet, there will be no shortages of initiatives and proposals, particularly from the Uzbek leadership.

Building on the initiatives he made on his first appearance at UNGA in September 2017, as Uzbekistan’s recently elected president, this year’s proposals by President Shavkat Mirziyoyev build on particularly two areas of great interest and significance for the international community: the conflict in Afghanistan and the situation in the Aral Sea.

President Mirziyoyev, in reference to Afghanistan, has suggested the creation of a permanent UN Commission whose main tasks will be to facilitate the nation’s socio-economic development.

The message has been unequivocal from the early days of his presidency: Uzbekistan is well positioned to be a proactive contributor and integral part of any process for the peaceful settlement of the conflict in Afghanistan, and secondly, that Afghanistan is a fundamental part of Central Asia.

Shortly after delivering his first UNGA address, Tashkent hosted the High-Level International Conference on Afghanistan “Peace Process, Security Cooperation and Regional Connectivity” in March 2018. This conference represented a pivotal moment in the international community’s efforts to bring peace, security and stability to Afghanistan. The conference recognized the importance of Afghan-led and Afghan-owned international and regional initiatives to promote peace and stability in the region. Furthermore, on the margins of the conference, the first meeting of the new format the C5 (5 Central Asian Countries) + Afghanistan was held.

Uzbekistan has engaged Afghanistan through a multi-faceted approach, primarily by focusing on the peace process itself, integrating Afghanistan economically in the region, and investing in human capital.

Uzbekistan has been an intrinsic part of past and ongoing efforts to address the Afghan crisis and is well placed to take the momentum of the Afghan peace process forward. In 1999 it hosted a peace conference on Afghanistan in the format of the 6+2 Contact Group, which included Afghanistan’s direct neighbours in addition to the United States and Russia. Currently, Uzbekistan is active in multiple initiatives concerning the Afghan crisis, namely the Kabul Process, Moscow regional consultations and the Heart of Asia-Istanbul Process.

In the context of the recent intra-Afghan talks which commenced in Doha on September 12, and six months after the United States signed an historic accord with the Taliban, Uzbekistan, through its Foreign Minister Abdulaziz Kamilov, has offered to host future rounds of intra-Afghan talks.

Uzbekistan has also worked to integrate Afghanistan economically in the Central Asian region, through major infrastructure projects such as the Surkhan Puli Khumri power line and construction of a railway from Mazar-i Sharif to the sea ports of the Indian Ocean, thereby accessing key sea lines of communication. For Uzbekistan, as a double landlocked country, connectivity is a key rationale for a peaceful Afghanistan, which can provide them with the shortest possible access to the sea. Conversely, Uzbekistan is positioning itself as a gateway for Afghan exports and imports through the Termez Cargo Center and the Navoi International Airport. Strengthening of trade and transportation links between Afghanistan and Central Asia can contribute positively to regional stabilization. This is particularly true for landlocked countries, as they are highly dependent on secure and stable region for access to global supply chains and transportation corridors, as well as sea access.

Lastly, in the context of the necessity to develop Afghanistan’s human capital, Uzbekistan is positioning itself as a gateway for training and education for young Afghans. A recent cooperative project (“Afghan Women”) initiated by Uzbekistan’s Ministry of Higher and Secondary Specialized Education, the European Union, the UN Development Programme and Kazakhstan, will enable Afghan women to graduate from higher education and vocational training institutions in Uzbekistan (in Termez and other cities) and Kazakhstan, thereby contributing to their economic empowerment and contribution to a better future for Afghanistan.

The second item raised by President Mirziyoyev at the UNGA of particular attention to the international community concerns the situation of the Aral Sea.

The drying up of the Aral Sea, which was the fourth largest lake in the world until the 1960s, is one of the biggest environmental catastrophes caused by human activity due to the unsustainable management and use of water resources during the Soviet era. As a result, today the area of the Aral Sea has declined to less than 10% of its original size in the 1960s. The environmental, climatic, socio-economic and humanitarian consequences that are felt to this very day pose a direct threat to the sustainable development of Uzbekistan and the countries of the Aral Sea region. Some of these consequences include land degradation and desertification, pollution and salinization of water and land resources, a shortage of drinking water, depletion of flora and fauna (including endemic species such as the Ustyurt mouflon and the Turanian tiger) and deterioration of health and livelihoods of the local population, particularly in the Republic of Karakalpakstan. The total direct and indirect social and economic losses caused by the environmental disaster in the Aral Sea Region amount to almost USD 150 million per annum.

Yearly, more than 100 million tons of dust and toxic salts rise into the atmosphere from the dried seabed of the Aral Sea annually travelling a distance of up to 1,000 km. As a result, we are also witnessing a gradual increase in the intensity and frequency of natural phenomena such as droughts as well as sand and salt storms.

Over three quarters of the inhabitants of the Aral Sea Region were at one point involved in the production, processing and transportation of fish. The once fertile deltas of the Amudarya and the Syrdarya (the two rivers feeding the Aral Sea) provided significant employment opportunities in the livestock and agricultural sectors. Over time, as the sea has receded, the employment opportunities caused by the loss of fishing and transportation industries have forced young people to leave for other regions of the country and abroad to find jobs.

Since the early years of its independence, Uzbekistan has actively engaged the international community in solving the Aral Sea related problems. On September 19 2017, President Shavkat Mirziyoyev, speaking at the 72nd session of the UN General Assembly, emphasized the need for a collective approach to this problem under the auspices of the UN, taking into account the interests of all countries in the region. While full restoration of the Aral Sea is not possible, its negative consequences can and must be mitigated. The most important task at present is to reduce the destructive impact of the Aral Sea crisis on the environment and the livelihoods of the millions of people living in the region, as well as to mitigate or prevent the aggravation of further deterioration of the climate-related impacts. “The Sea is Gone, the People are Not”: this is the guiding principle of Uzbekistan’s approach to the Aral Sea problem.

At Uzbekistan’s initiative, the UN Multilateral Trust Fund for the Development of the Aral Sea Region was established in 2018. This Trust Fund provides a unified platform for all involved stakeholders and is tasked to enable close cooperation between development partners, international financial institutions, civil society, and also bilateral and multilateral donors. The aim is to develop and implement effective measures towards mitigation of the negative environmental and socio-economic consequences of the Aral Sea crisis, as well as to promote joint efforts to achieve the 2030 Sustainable Development Agenda.

In a short period of time, the Trust Fund managed to mobilize resources amounted to USD 26.1 million – USD 17 million in 2019, and USD 9.1 million over the past period of 2020: including direct and parallel donor contributions from the Governments of Uzbekistan, Norway, Finland, Republic of Korea, Japan, UAE, and the European Union. In addition, the European Investment Bank (EIB) and KfW Bank (Germany) are actively cooperating with the Trust Fund.

Within the framework of the two Calls for Proposals, the implementation of several projects has aimed to improve the quality of perinatal care services, provide access to drinking water, expand income generation opportunities, and support afforestation methods.

Also in 2018, the President issued a decree “On the establishment of the International Innovation Center for the Aral Sea Basin under the President of the Republic of Uzbekistan”. The main objectives of the Center are, among others, to improve the productivity of agro-ecosystems on the dried and saline bottom of the Aral Sea; to carry out experimental pilot projects in order to test new crops and shrubs which could be resistant to soil salinity and dry conditions, and in the process, to attract innovative technologies and leading best practices from other countries.

One particular project of the Center that is worth highlighting is called “My Garden in the Aral Sea”; a crowdfunding platform to raise funds for planting trees using the latest water-conservation technologies, where anyone can donate (for instance, through their website – https://aralforest.org/ – one USD for a drought-resistant tree or USD 3.50 for an ornamental tree). Experts have selected varieties of trees that are resistant to the climatic conditions of the region, including ash, elm, catalpa, willow, saxaul, circassia, and kadam. The ambitious goal of this project is to have 100,000 trees planted by the end of this year.

Building on the aforementioned initiatives, President Shavkat Mirziyoyev yesterday suggested to adopt a Special Resolution of the UN General Assembly declaring the Aral Sea region an area of ecological innovation and technologies. This initiative builds on the high-level international conference held in Nukus in October 2019 on the theme of “The Aral Sea Region – a Zone of Environment Innovations and Technologies”.

The innovative approach of the Government of Uzbekistan towards the Aral Sea is not only limited to the adoption of the latest technology and innovations. It also includes institutional innovations – including greater state decentralization, engaging the private sector creatively thorough Public-Private Partnerships (PPPs), the inclusion and involvement of non-traditional sectors (tourism, culture, civil society, etc), and practical application of circular economy concepts.

It is expected that the initiatives put forward yesterday by President Shavkat Mirziyoyev – both on the Aral Sea, the situation in Afghanistan and other pressing issues – will go a long way into stimulating the international community into collective action.