A Strategic Vision of Pakistan's Foreign Policy: A Conversation with Dr. Sartaj Aziz

A Strategic Vision of Pakistan’s Foreign Policy: A Conversation with Dr Sartaj Aziz

Dr Sartaj Aziz will outline the strategic vision of Pakistan’s foreign policy and discuss the country’s role in the security and stability in the region, touching upon the major pillars of Pakistan’s foreign policy: internal and external security; rapid and sustainable development; a peaceful neighbourhood; and turning Pakistan’s geostrategic location into an asset through trade, transport and energy connectivity with China (as evidenced in the China-Pakistan Economic Corridor), Central, South and West Asia.

Dr Sartaj Aziz is advisor to the prime minister of Pakistan on foreign affairs. He held important positions in the United Nations, the Food and Agriculture Organization, World Food Council and the International Fund for Agricultural Development before starting his political career in 1984, when he joined the Pakistan Federal Cabinet as minister of state for food, agriculture and cooperatives. He was elected senator in 1985, 1988 and again in 1994, and also served as minister of agriculture, minister of finance and minister of foreign affairs. In 1993, he was appointed as secretary general of the Pakistan Muslim League. 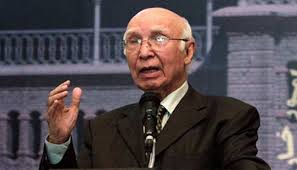