The Sri Lankan Government has just released its new and ambitious 8-year development plan “Vision 2025: A Country Enriched” setting out a course of reforms to make the country more competitive and lift the standards of living for all Sri Lankans. The report outlines the new approach to growth which will be structured on a knowledge-based, highly competitive, social market economy model in order for the country to succeed in the modern integrated global economy. Furthermore, the new trade policy aims to create a more liberal, simple, transparent and predictable trade regime. These policy changes will attract more export-oriented FDI, improve trade logistics, make customs procedures transparent and quicker, and boost firms’ abilities to compete in global markets. Lastly, the vision aims for Sri Lanka to become a connectivity hub in the heart of the Indian Ocean.

Vasantha Senanayake was appointed State Minister of Foreign Affairs in June 2017. He is an elected Member of Parliament from the Pollonnaruwa district representing the United National Party. A lawyer by profession. He graduated from the University of Buckingham, UK. Apart from his official duties, Mr. Senanayake has been a vocal campaigner in gender rights and women’s empowerment issues. He has also taken great interest in diaspora engagement activities. He has been an avid campaigner to limit the industries of tobacco and alcohol and bring about more stringent regulations. He has previously served as State Minister for Irrigation and Water Resources Management and Deputy Minister of Tourism and Sports. Mr. Senanayake has served as the Chairman of many Government boards namely National Lotteries Board, Water Resources Board and Janatha Fertilizer Enterprises Limited and is the present Chairman of the District Development Council. 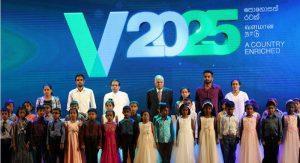 The Sri Lankan Government has just released its new and ambitious 8-year development plan “Vision 2025: A Country Enriched”. The report outlines the new approach to growth which will be structured on a knowledge-based, highly competitive, social market economy model.