Pakistan's Changing Reality: An Opportunity for Peace and Development

Pakistan’s Changing Reality: An Opportunity for Peace and Development

Pakistan’s geostrategic location at the crossroads of South Asia, Central Asia, China and the Middle East has made it a major political and economic actor in the region. Most of the recent initiatives envisaged by the Government of Pakistan put connectivity at its core, such as the China-Pakistan Economic Corridor (CPEC), the Central Asia-South Asia (CASA) power project, among others. In accordance with the increasing geostrategic weight of Pakistan in the world, Pakistan’s Planning Commission, the financial and public policy development institution of the Government of Pakistan, has prioritized key areas under the Vision 2025 Programme. These include, inter alia, sustained and inclusive growth, food security, integrated energy, institutional reform and modernistation of public sector governance, a modernized transport infrastructure and regional connectivity.

At the Ministry of Commerce, Engr. Khurram Dastgir Khan has revitalized Pakistan’s trade diplomacy. He spearheaded the successful campaign to obtain GSP+ trade preferences for Pakistan from the European Union. In spring 2014, he led vital negotiations to obtain reciprocal market access for Pakistan and to normalize trade with India. His vigorous diplomacy has led to the start of Pakistan’s negotiations for free trade agreements with Turkey and Thailand. Under his stewardship, the Ministry of Commerce has revamped national trade defence laws, obtained approval for Pakistan’s accession to TIR convention, and has successfully concluded institutional reforms of the Ministry itself as well as its attached departments. 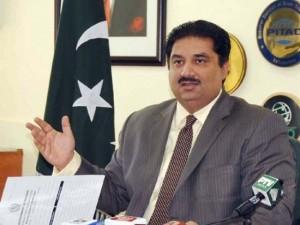