Inclusive Democracy and Economic Transformation in Nepal: Prospects and Challenges

In recent years, Nepal has undergone a political transformation of historic proportions. The decade long armed conflict was finally converted into peace process with the signing of a wide-ranging peace accord in 2006. The new constitution of Nepal, promulgated in September of 2015, was the result of eight years of deliberation to ensure participatory, transparent and inclusive processes; thus representing a turning point in Nepal’s constitutional and political history. Nepal’s homegrown peace process and its’ success is a good example for countries transiting from conflict to peace.

The new constitution aims to institutionalize inclusive and democratic polity, pluralism, the rule of law, representative and accountable government, social and economic justice, and universally accepted human rights among others. While the new constitution is very comprehensive, the challenge remains how to ensure its effective implementation, with the ultimate goal of consolidating peace, stability, as well as, an all-inclusive economic growth and development to sustain the political gains made so fa

Dr. Prakash Sharan Mahat is the Minister for Foreign Affairs of Nepal. He assumed his office on 26 August 2016. Dr. Mahat has an active political career of more than three decades. He has actively participated in democratic movement, conflict resolution, and the peace process of the country. He played a vital role in the Constitution drafting process as a member of the Constitution Drafting Committee of the 2nd Constituent Assembly. He has also served in different parliamentary committees, including the State Affairs Committee as well as the Special Parliamentary Hearing Committee. Dr. Mahat was Minister for Energy from 2010 to 2011, State Minister for Foreign Affairs in 2004-2005, a Member of National Planning Commission from April 2002 to October 2002 and an advisor to the Prime Minister of Nepal from September 2001 to May 2002. 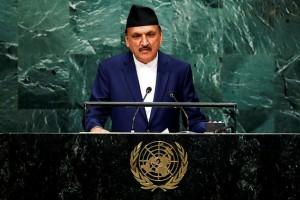 EIAS welcomes Nepal’s Minister of Foreign Affairs, Dr. Prakash Sharan Mahat, for a talk on the economic and political transformations taking place in Nepal, with a particular focus on the new constitution, which aims to institutionalize inclusive and democratic polity, pluralism, the rule of law, representative and accountable government, social and economic justice, among others.