You can Watch the Webinar here

Ming-Yen TSAI, Taipei Representative to the EU and Belgium

The Security Situation in East Asia

Maritime security is an issue of rising importance, especially in East Asia. The South China Sea, as well as the Taiwan Strait, have received special attention in this regard due to their central location. The adherence to international law in these areas, in particular with respect to the freedom of navigation, is increasingly seen as under threat. This is primarily due to a more intense militarization of sea lanes. The Free and Open Indo-Pacific vision has been advanced by countries such as the United States and Japan,while in Europe, France and Germany have respectively launched their Indo-Pacific strategies. However, China’s claim in these two regions is essential and a key variable to their peace and stability. Therefore, after the adoption of the National Security Law in Hong Kong, China’s possible next moves in these regions are drawing international attention and are critical for the reactions of relevant actors in the region, including the US, Japan, Korea, Taiwan and ASEAN countries. This conference will address how this friction will further develop. What current and future role should Europe assume in this critical context: that of a partner, a mediator, or a power in its own right?

Panel I: Security Dilemmas in the Taiwan Strait

As a waterway, the Taiwan Strait has recently seen mounting tensions. China and Taiwan appear to be drifting further apart after the landslide re-election of President Tsai in January, and the “resolution” of the Hong Kong problem by China through the National Security Law in June, which could lead to a more assertive stance towards Taiwan by China. Furthermore, the increasing capabilities of the Chinese military, in particular its naval and precision-guided missile capabilities, has called into question whether Taiwan could long withstand any serious offensive initiative even with outside help. Taipei, in turn, is also trying to strengthen its defences. In late August, the purchase of 66 of the latest model F-16 jets from the United States was formalized, the first sale of such technology since 1992. Added to this are the close relations between the US and Taiwan and the increased confrontation between the US and China. Can the EU play a mediating role in defusing the tensions in the region?

Only few waters can claim the significance that the South China Sea carries for global trade. Around one fourth of worldwide shipping is estimated to pass through these sea lanes connecting the economic giants of Asia and Europe as well as energy hubs in the Middle East. Thus, all the more worrying are the periodic clashes between vessels in the area – such as the Chinese coastguard vessel’s collision with and sinking of a Vietnam fishing vessel this April and the lethal confrontation between Vietnamese fishermen and the Malaysian coastguard this August– as well as the growing militarization of disputed islands. What will be China’s next move under the current Sino-American military tensions? As for the EU, whose companies send hundreds of billions of US dollars worth of goods through the South China Sea each year, has professed the aspiration to become more active in regional security questions, most prominently in its Global Strategy. What is the future potential of European efforts and how can the tensions in the South China Sea be simmered down? 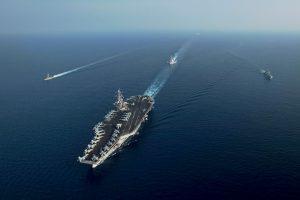 ‘Maritime security is an issue of rising importance, especially in East Asia, including the South China Sea and the adjoining Taiwan Strait.