The concession of the Greek port of Piraeus to the Chinese state-owned company, COSCO, has the potential to change the competitiveness of the Greek port vis-à-vis ports in the Hamburg-Le Havre range. These ports have dominated the EU external shipping market thanks to their infrastructural connection with the core of the European economy and their ability to adapt to changes in the shipping industry. The emergence of Asian economies – China and India – from the 1990s, and the enlargement of the European Union have elevated the importance of the Mediterranean Sea, by including it in Far East-North America routes. Despite the advantage of a small deviation distance from the Gibraltar-Suez route, the backwardness of railways and road connection from ports to the hinterland and the lack of port infrastructure modernization in some ports have undermined the ability of these ports to acquire a larger share in the shipping market.

The Chinese presence in the Piraeus has upgraded the geostrategic importance of this port. With an increased capacity of 3.16 million containers in 2013 – compared to 433,582 in 2008, the port has the potential to become a distribution hub not only for Europe but also for Asia and Africa. To the Chinese, it also represents a nodal point of its Maritime Silk Road connecting the maritime with the land traffic, which takes the form of a land-sea express line connecting Budapest to Belgrade crossing the Macedonian capital of Skopje. This project has been agreed by the Chinese with Hungarian and Serbian representatives within the framework of the 16+1 cooperation and it matches well with the Trans- European Transport Network (TEN-T) and the Juncker Plan. The implementation of these infrastructural projects will determine the future competitiveness of the Piraeus port. This event will shed light on the development of the Piraeus’ competitiveness vis-à-vis North-western European ports, and assessing in what kind of shipping sectors and markets the Piraeus port will become more competitive. 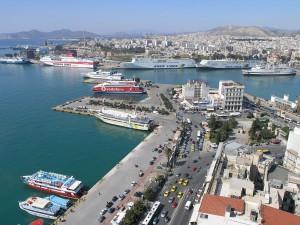