“Chinese assertiveness” has become an infamous phrase – it is regularly used by media, pundits, and politicians, yet there is little scholarly work that would clarify the meaning of the concept. A similar situation exists when it comes to China’s power. Although it is generally assumed that “China is rising,” there are surprisingly few systematic studies of China’s power being done comprehensively and rigorously.

Dr Richard Turcsanyi’s recent book Chinese Assertiveness in the South China Sea addresses these issues. It defines the concept of “Chinese assertiveness,” establishes what policy actions qualify to be included, and then tests explanations as to why China conducted such policies. The South China Sea is taken as the case study since this is the area where there is nearly a consensus that China acts assertively. By providing a detailed account of the events in the SCS and by analyzing power dynamics in the region, it identifies the driving forces behind China’s assertive foreign policy. Considering China’s power on a domestic as well as an international level, it examines a number of different sources of hard and soft power, including military, economics, geopolitics, and domestic legitimacy.

The author demonstrates that Chinese assertiveness in the SCS can be explained not only by increases in China’s power, but also by effective reactions to other actors’ foreign policy changes. 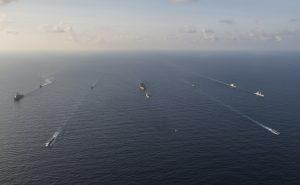