This Academic Conference under Chatham House rules will include a high-level expert exchange between scholars and academia representatives on the topic of East Asian Political & Economic Security. The aim is to explore the current political and economic issues, the potentials to build mutual trust and confidence, as well as an opportunity to produce innovative ideas and new constructive approaches.

In times where power politics are regaining a more prominent role on the international stage, cooperation on security has become evermore important. In particular, in East Asia, the case of North Korea’s nuclear threat is reaching news headlines every single day.

At the same time, because of a growing tendency towards inward looking and protectionist policies in the West, free and open trade can no longer be taken for granted. Across Asia, the US withdrawal from TPP leaves the initiative to capitals in Europe and East Asia to invigorate open trade and investment across the globe.

In matters of politics, economics and security, where is the balance of power in East Asia tilting towards? How credible is the hypothesis of military overexpansion and generation of international coalitions? What is the emerging security infrastructure in East Asia? What are the consequences of a closer US-South Korea-Japan strategic alliance in the face of the North Korean threat?

There have already been initiatives to explore new ways to guarantee peace and eliminate hostilities or threats in the region.

The first session will discuss the possibilities to develop an international consensus on how to deescalate the several crises in East Asia and to establish confidence- and security-building measures in order to increase predictability and transparency.

North Korea is unlikely to be coerced away from its present trajectory. Different players have maritime claims in the region without international consensus so far. Cybersecurity has become a real concern for East Asia. Cyberattacks have shown to become very threating.

Which security-building measures can be developed to avert and control the escalation of the crises? What alternative measures or solutions could be initiated by the international community, the East Asian capitals and the EU especially? Is imposing more sanctions on North Korea going to mitigate or escalate the already very tense situation and even would have imposing sanctions any impact whatsoever? How can safety and security be preserved in an ever-faster deployment of the military in East Asia? Where does Taiwan position itself strategically? What could be the legal and technological challenges of arms control?

The second session will discuss the potentials of how developing the economic interdependence in the East Asia region could counterbalance the security threats. Political differences should not be an obstacle for further regional economic integration. On the contrary it could help to reduce tensions.

How can Foreign Direct Investments and trade agreements in a balanced way contribute to ebb the tense geopolitical challenges?

Looking at the EU, which in seventy years evolved from the dark days of division and war to one of the most successful cases of cooperation, what could be the inspiration for the East Asia region? Even if not all the European countries are members of the EU, the economic cooperation agreements between EU and non-EU countries assisted a lot to integrate supply chains and interregional trade. More European economic and financial regional interactions proved a sound basis for reducing and overcoming geopolitical and historical tensions. 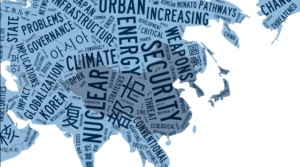 This Academic Conference will include a high-level expert exchange between scholars and academia representatives to explore the current political and economic issues, the potentials to build mutual trust and confidence, as well as an opportunity to produce innovative ideas and new constructive approaches.