China, the EU and Africa: Prospects for Trilateral Security Cooperation (June 2013)
Home  /  EU-Asia at a Glance 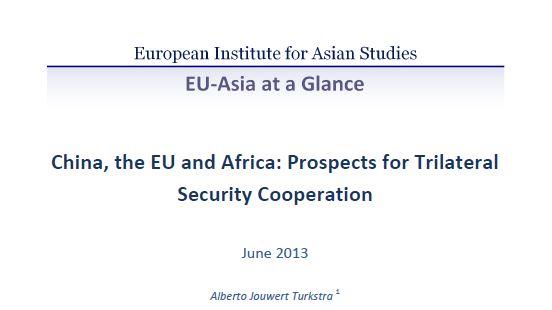 Over the last two decades, China has become one of the most important external powers in Africa. With booming economic investments and a growing number of Chinese citizens living in Africa, China’s presence in Africa has deepened beyond economic objectives and has extended to the field of security. It has shown increasing willingness to collaborate with the international community and participate in multilateral frameworks for the promotion of security in Africa such as UN peacekeeping operations. The rapid ascendance of China in a continent that has long been under the European sphere of influence has challenged existing power relations. The EU’s answer to the changing geopolitical dynamics was to initiate a framework of trilateral dialogue and cooperation between itself, China and Africa, which has made slow but gradual progress. While a normative gap still exists between China and the EU, China has been engaging with the normative principles that have emerged in the post-Cold War that have sought to re-define the concept of sovereignty, such as the Responsibility to Protect (R2P). Both powers have increased shared interests and a more pragmatic approach to foreign policy making is emerging on both sides that can facilitate trilateral cooperation in specific areas such as the fight against piracy in the Gulf of Aden and tackling the illicit trade of small arms and light weapons (SALW).