Central and Eastern Europe’s courtship with China: Trojan horse within the EU? (January 2014)
Home  /  EU-Asia at a Glance 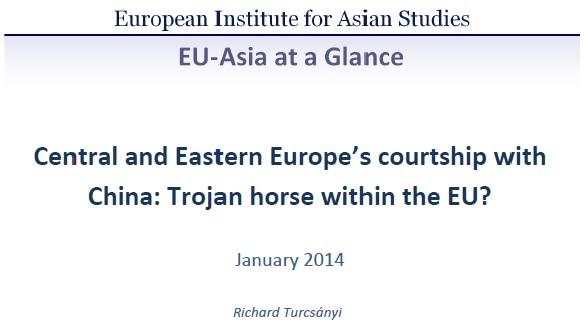 Relations between China and 16 Central and Eastern European (CEE) countries have been developing rapidly in recent years, with the opening-up of the new 16+1 platform, the establishment of annual summits and further specialised forums, and promises for an upsurge in investment and trade. While the new platform is still ‘work in progress’, it has attracted increasing attention for supposedly affecting the united stance of the EU in the conduct of its foreign policy. In this paper the rationale of each of the three sides – China, CEE countries, and the EU – will be analysed. It is argued that there is nothing substantive in this relation which would go against the EU; moreover, neither the CEE countries nor China have any motivation to try to weaken the EU. While there may have been some mishandlings in the messaging towards the rest of the EU, Western European countries should rather try to understand their CEE fellows instead of criticising them without much valid argumentation. In fact, this may instead demonstrate internal EU problems, including the marginalisation of some of the countries and the application of double standards for different member states.