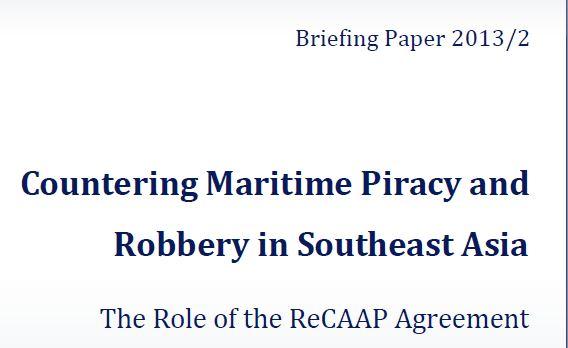 The surge in maritime piracy and robbery in Southeast Asia that followed in the wake of the 1997 Asian Financial Crisis led to the drafting of the Regional Cooperation Agreement on Combating Piracy and Armed Robbery against Ships in Asia (ReCAAP) by 16 countries in 2004. This paper presents three arguments: First, that ReCAAP has become one of the cornerstones of counter-piracy efforts in Southeast Asia, and has managed to significantly decrease the number of attacks in the region since their peak in 2000. Although the economic crisis that began in 2009 fuelled a renewed rise in the number of incidents, the situation appears to have been successfully stabilised in 2012. Second, the accession of Malaysia and Indonesia – the only two Association of Southeast Asian Nations (ASEAN) member states that are not ReCAAP contracting parties – would increase the mechanism’s efficiency. The accession of Indonesia in particular could help address the rapidly increasing number of piracy and robbery incidents in the country’s waters and harbours. Third, ReCAAP represents an ideal opportunity for the European Union (EU) and European countries to increase their influence in Southeast Asia and gain a foothold as security actors in the region.