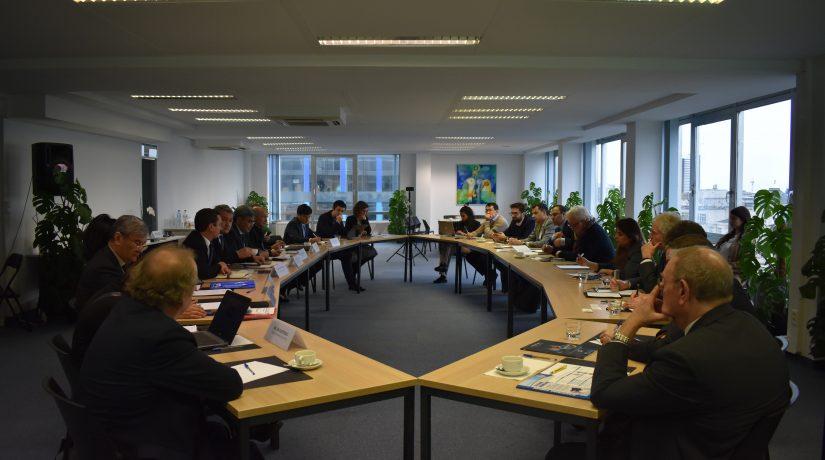 On 20 February 2020 the European Institute for Asian Studies (EIAS) hosted a closed-door roundtable event on the subject of ‘Actual Issues of Interaction between the EU and Central Asia in the Context of Intensified Regional Cooperation and Economic Integration’. The event served as a platform for a delegation of Uzbek speakers led by Obid Khakimov, Director of the Center for Economic Research and Reform (CERR) to brief the assembled audience of experts and take questions on the progress of Uzbekistan’s accession process into the World Trade Organisation (WTO) as well as the status of cooperation between Uzbekistan and the Eurasian Economic Union (EAEU) and with the European Union (EU).

Dr Khakimov began his presentation by outlining the overall objective of economic reform in Uzbekistan, highlighting the desire for the country to move away from a resource-based development model to a more efficient innovative growth model, with a focus on digital technology. It is in the national interest of Uzbekistan to create an environment of sustainable economic development that is of a high quality and which will raise living standards for the whole population.

Uzbekistan is not taking a linear approach to its regional and global integration, but is instead employing a multi-vector approach that is characteristic of the country’s wider foreign policy. This means that while the accession procedure to the WTO is ongoing, Uzbekistan is also working with the EU on an Enhanced Partnership and Cooperation Agreement (EPCA), and dedicating working groups in the Uzbek parliament to assessing the possibility of establishing a cooperation agreement with the EAEU. Dr Khakimov was clear that the EU is seen as a strong potential market for Uzbekistan and that more product standards will be raised in the near future to meet European levels and allow increased trade.

Dr Khakimov also stressed the importance of green policy and green economic development, pointing out that despite not being an original party, Uzbekistan has now committed itself to the fight against climate change having become a signatory of the Paris Climate Accords.

The Chinese Belt and Road Initiative (BRI) was also a key topic in the brief. Uzbekistan is part of a number of major railway infrastructure projects designed to improve logistics and transit times across Central Asia, a region strategically located between economic powerhouses in Europe and the Far East. Uzbekistan, which is the only country in Central Asia that shares a border with all the others, is particularly significant in this regard. Significant also, is the establishment of cross-border relations with Afghanistan. For many years, the Uzbek frontier with the restive nation was to all intents and purposes, closed. As such, this development is extremely positive for regional stability and cooperation, opening up new avenues for trade and logistics.

The briefing was met with warm words of encouragement from audience members, who also posed questions to the delegation, leading to a thought provoking discussion and exchange of views.