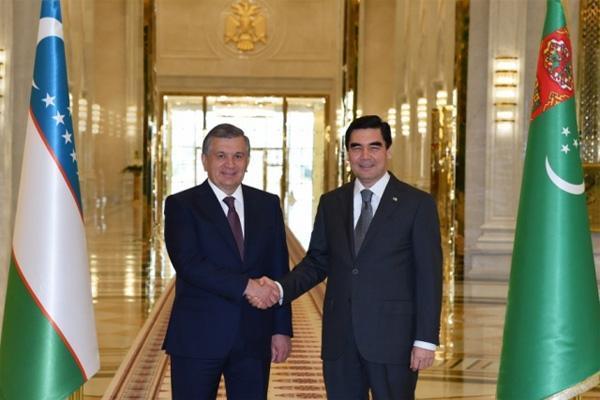 On April 23 and 24, Turkmenistan’s President Gurbanguly Berdimuhamedov will pay an official visit to Uzbekistan for a landmark summit with his Uzbek counterpart Shavkat Mirziyoyev. During his visit, a comprehensive and broad spectrum of areas is expected to be covered including the enhancement of trade, economic and investment links; transport, communication, education, and culture. This visit follows President Mirziyoyev’s trip to Turkmenistan in March last year, his first trip abroad after being elected president in December 2016, during which relations between both countries were elevated to the level of strategic partnership. Interaction between government representatives has increased during the last year, both at a bilateral level as well as on the sidelines of regional and multilateral fora, leading to greater political trust in the process.

Relations between the two republics are characterised by an increasing convergence of interests, most notably on the priority afforded to the development of trade, transit, transportation and energy linkages; and the adoption of common positions vis-à-vis a number of regional challenges. On Afghanistan, with which both countries share a border, a substantial amount of political capital has been invested into efforts strengthening trade and transportation links between Afghanistan and Central Asia in the belief that these investments can contribute positively to regional peace and stabilization. Other complementary diplomatic efforts undertaken include the recent hosting by Uzbekistan of the Tashkent Conference International Conference on Afghanistan “Peace Process, Security Cooperation and Regional Connectivity” and the 7th Regional Economic Cooperation Conference on Afghanistan (RECCA) meeting under the theme “Deepening Connectivity and Expanding Trade through Investment Infrastructure and Improving Synergy” held in Ashgabat last November. In addition, as both Turkmenistan and Uzbekistan are downstream countries, cooperation on regional water issues will be of critical importance, including in the framework of the International Fund for Saving the Aral Sea which Turkmenistan is currently chairing.

High on the bilateral priority list is the development of the border regions, to inject greater dynamism and intensify economic activity along their lengthy (over 1,600 kilometres long) and densely populated border to facilitate smoother and more efficient cross-border trade, through the establishment of special economic zones and development of join industrial projects. This will be facilitated by the rapid progress that has been achieved in border demarcation, possibly one of the most contentious issues in the region which in the past prevented regional integration. The working groups of the Uzbek-Turkmen intergovernmental commission on the delimitation and demarcation of the state border continue to meet regularly, and last November, on the sidelines of the high-level conference in Samarkand, a tripartite agreement between Kazakhstan, Turkmenistan and Uzbekistan was reached, determining the points of junction between the three countries.

Uzbekistan under President Mirziyoyev has adopted a very proactive “railway diplomacy“, improving rail linkages with all its neighbours, including with Turkmenistan, with which a Memorandum of Understanding on the further development of cooperation in railway transport was signed during Mirziyoyev’s visit to the country last year. Indeed, according to the report Unlocking the Potential of Railways: A Railway Strategy for CAREC, 2017–2030, “regional cooperation in railway development can contribute to increased interregional and intraregional trade in the subregion”. The main challenge now lies in developing the new railway networks and transportation infrastructure to
accurately reflect and match the current trading patterns. This would greatly help transforming Central Asian Republics from landlocked to landlinked.

Both countries are important pillars as transit hubs in a reconnected Eurasia and occupy a critical place in the grand connectivity projects traversing Eurasia from East to West (such as the Belt and Road Initiative); as such, they are aiming at capturing a greater share of regional and transcontinental trade, as the volume of goods transported by land is due to increase significantly in the years to come.
For double-landlocked Uzbekistan, access to the Caspian Sea port of Turkmenbashi facilitates access to the markets of Iran and the Middle East, thereby linking to other international transportation corridors such as the International North South Corridor and the Lapis Lazuli Corridor.

Both republics are members of the Ashgabat multi modal transit agreement which links central Asian with the Persian Gulf, in force since 2016. Initially a quadrilateral agreement between Turkmenistan, Uzbekistan, Iran and Oman; other major countries such as India and Kazakhstan have since joined proving the added value of this inter-regional connectivity initiative in strengthening the infrastructure for the unification and harmonization of transportation systems across regions. The opening of new border crossings during President Mirziyoyev’s visit to Turkmenistan (the newly constructed 1,750-meter-long Turkmenabad-Farab railway bridge and a 1,600-meter-long automobile bridge across the Amu Darya river) will facilitate international flows of goods and the realisation of the Uzbekistan-Turkmenistan-Iran-Oman corridor.

Turkmenistan and Uzbekistan are also partners in other major regional energy projects, most notably in the framework of TUTAP (Turkmenistan-Uzbekistan-Tajikistan-Afghanistan-Pakistan power supply network) which links Central Asia with energy-deficient South Asia and is a project supported by the Asian Development Bank. Uzbekistan has also been invited to participate in the Turkmenistan-Afghanistan-Pakistan-India (TAPI) and is currently assessing the prospects, feasibility and possibilities for joining the gas pipeline project.

To conclude, in recent times, relations between Turkmenistan and Uzbekistan have steadily matured and evolved from cautious, ad hoc cooperation to an all-encompassing strategic partnership in order to realise the untapped potential of bilateral relations in many spheres. This has been possible thanks in part to the adoption of a pro-active “Central Asia First” foreign policy by president Mirziyoyev. With the visit of president Berdimuhamedov to Uzbekistan, bilateral relations will reach a zenith, with mutual understanding and shared approaches to regional challenges replacing old disputes and misunderstandings, setting a positive example and a strong foundation for the prospects of regional integration in Central Asia to become a reality in the near future.

Photo Credit Press service of the President of Uzbekistan