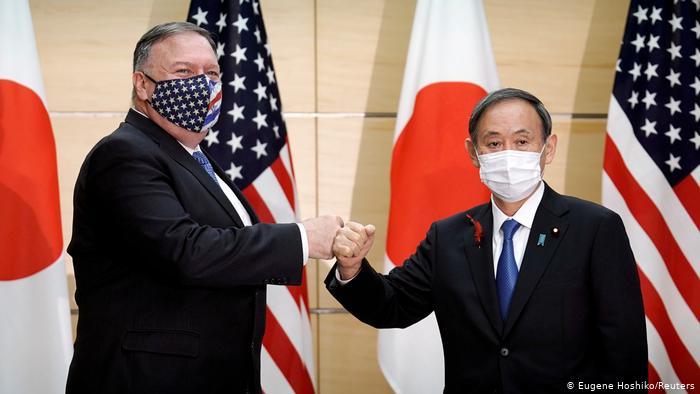 While China is Japan’s biggest trading partner, the relationship between the two countries has had its ups and downs over the past decades. Polls suggest that Japanese opinion of China in 2020 has hit an all-time low. Recently, Japan has increasingly been making decisions that may not be to Beijing’s liking. Two noteworthy developments will be discussed here. Firstly, there is Japan’s signing of the “Partnership on Sustainable Connectivity and Quality Infrastructure” with the European Union on 27 September 2019, an agreement that could be perceived as an alternative and response to China’s Belt and Road Initiative (BRI). Secondly, there is the upscaling of its military capacity (partly under pressure of the US) and strengthening of its ties with other nations in the Asia-Pacific. Particularly the Quadrilateral Security Dialogue (“Quad” for short), a strategic forum between the US, Japan, India and Australia, has gained momentum.

On 27 September 2019, the EU-Japan connectivity partnership was signed at a high-level event, featuring then Japanese PM Shinzo Abe and outgoing President of the European Commission Jean-Claude Juncker. However, one year after its implementation, not much seems to have happened. In a nutshell, the partnership is a non-binding agreement, stating that the EU and Japan will cooperate in building infrastructure and enhancing connectivity (digital, transport, energy, and people) in the regions of the Western Balkans, Eastern Europe, Central Asia, the “Indo-Pacific” and Africa; the same regions targeted by the Chinese BRI. The EU-Japan initiative emphasises shared values such as openness, transparency, inclusiveness, and a level playing field, which are also apparent allusions to the BRI, which has been criticised for a lack of transparency and giving advantage to Chinese companies.

At the Europa Connectivity Forum, where the partnership was signed, Abe claimed that “Whether it be a single road or a single port, when the EU and Japan undertake something, we are able to build sustainable, rules-based connectivity from the Indo-Pacific to the Western Balkans and Africa”, and Juncker promised infrastructure “without mountains of debt” or a reliance “on a single country”.

However, despite such jabs, China has written off much debt as well. For example, in April 2019, China and Malaysia renegotiated the costs of a high-speed railway project along the East-coast of Malaysia, which resulted in a lowering of the costs for Malaysia of about 30%.

The narrative that China’s intentions are unequivocally bad has become quite commonplace, and there seems to be an increasingly sharp divide between  pro– and anti-China opinions. I would argue that to the contrary, it is now – more than ever – important to critically assess developments on the international stage without falling into stereotypes or adhering to a framework of ethical dualism. The partnership between Japan and the EU implicitly seems to solidify such dualist narrative. For example, its posing of dualisms such as open versus closed, transparent versus opaque, fair versus unfair, and sustainable versus unsustainable arguably lacks nuance. In the end, governments will act in their own interest, whatever narrative they may push.

The EU-Japan partnership could also be criticised for upholding the narrative of developed versus developing country. Indeed, the idea of “developed” countries (as benefactor) providing aid to “developing” countries (as beneficiary) is problematic. Shose Kessi, a social psychologist at the University of Cape Town points out that the idea behind the developed-developing country dichotomy is that Western countries are the norm, while other countries are delineated as backward, lazy and irresponsible. In many ways, this dichotomy simply seems to replace that of coloniser versus colonised. Furthermore, it can be questioned whether this rhetoric, in combination with that of “shared values” serves to cloud the fact that these projects in the end come down to business, and are thus not some form of humanitarian aid or mission for democracy.

There still seems to be a lot of uncertainty about the specific projects to be undertaken under the connectivity partnership. Romana Vlahutin, EEAS Ambassador at Large for Connectivity reiterated in January the hope to present concrete plans by the EU-Japan summit this year. However, due to the COVID-19 pandemic, it is uncertain when this will take place. On 26 May 2020, a virtual meeting took place between the leaders of the EU and Japan. Yet, the connectivity partnership was not discussed, prioritising a discussion of the pandemic instead. Connectivity was mentioned in the resulting joint press release as one of the issues to be taken up at the summit to be held “in the near future”, but there is no explicit reference to the connectivity partnership. The putting into action of the partnership thus seems to have been postponed due to the coronavirus pandemic, which is understandable, but the apparent silence does raise some questions.

Despite its pacifist constitution, Japan’s military capabilities are increasingly being ramped up. Japan’s Defence Ministry has requested a budget of almost USD 52 billion for 2020, a record increase of 8.3%. The increased budget is to be used for anticipating new threats in the fields of cyber, space and electromagnetic security. The increase of Japan’s budget can be understood as a reaction to China’s growing military assertiveness, but also to the perceived threat of North-Korea and the US pushing Japan to invest more in its military. Beijing too, has increased its military spending, although its 6.6% budget increase is smaller than that of preceding years.

Most recently, the commotion around the Aegis Ashore missile system has received much media attention. The purchase of the American land-based system was cancelled in June, listing budgetary problems and objection by local communities as official reasons. Currently, the Defence Ministry is conducting research aiming at an alternative sea-based system, with concrete plans promised by the end of the year. Another reason for the abrupt cancellation may have to do with Japan’s ambitions to develop first strike capabilities, which could enable it to launch missile attacks on military bases in neighbouring countries. If this would enable Japan to hit China, we can expect serious tensions between the two countries.

Another reason for tension is Japan’s warships. The JS Izumo, Japan’s first aircraft carrier since the Second World War, was considered a grey zone under its constitution until December 2018, when the modification of the “helicopter destroyer” into an offensive aircraft carrier was approved. China warned against the production of such aircraft carriers in 2017. In June of this year, the conversion officially started.

The biggest reason for tensions is arguably the heated dispute over the Senkaku/Diaoyu islands. Chinese Coast Guard ships have remained in the territorial waters of the islands for a record period from 11 until 13 October, ignoring the Japanese authorities’ demand to leave the area. Chief Cabinet Secretary Katsunobu Kato commented that Japan is determined to protect its territory.

At the moment, Japan thus seems to be carefully weighing its options, and Japanese military development is certainly something to keep an eye on as the government keeps pushing the boundaries of its pacifist constitution.

Another factor adding to the tensions is the Quad, a strategic forum featuring the foreign ministers of the US, Japan, India and Australia. The first ministerial meeting of the four countries was held in New York in September last year. This year, the forum was held in Tokyo on 6 October. The initiative has gained momentum, because of the increasing assertiveness of China in the East- and South-China Seas as well as in the Taiwan Strait. One of the prominent themes of the Quad is maritime security cooperation in the “Indo-Pacific” region. There are regular maritime military exercises between member countries, and new agreements have been signed, for example the Reciprocal Provision of Supplies and Services Agreement between India and Japan signed last month, facilitating naval cooperation between the countries. It has furthermore been confirmed that Australia will participate in the Malabar exercises in the Indian Ocean next month, which already included the other three Quad countries.

While the other FM’s did not mention China explicitly during the Quad talks, Mike Pompeo launched an attack on China, commenting that he wishes to institutionalise the Quad as a security framework to counter the challenges that the Chinese Communist Party poses to Quad countries. China has reproached the Quad, calling it an “exclusive clique”. In the end, much depends on the US and its China-policy, which will most likely determine the future of the Quad to a great extent. It is unlikely that efforts towards institutionalisation will be undertaken before the upcoming American presidential elections of 3 November. It is furthermore unsure whether Biden would push for an institutionalisation of the Quad, were he to be elected. For the moment, however, it seems that tensions between Japan and China will keep on rising.