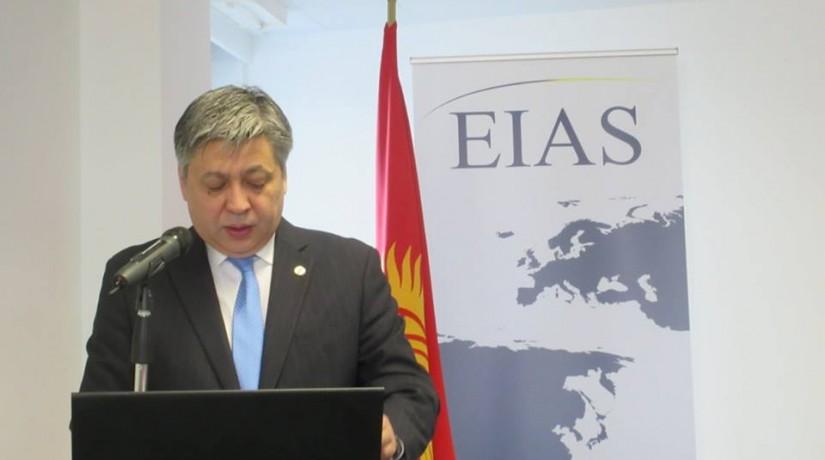 On February 16, EIAS had the pleasure to welcome Kyrgyzstan’s Minister of Foreign Affairs, H.E. Mr Erlan Abdyldaev, for a speech and subsequent dialogue with the audience on the country’s foreign policy interests, priorities and challenges, both in Central Asia and beyond.

Minister Abdyldaev strongly reaffirmed that the most important area of activity for all branches of the central government was the formation of a truly law-governed state through enhancing its electoral system. In addition, the Foreign Minster underlined the active efforts aimed at a stronger economic development performance of the country and the creation of the most attractive conditions for investors.

Since the country’s independence, ground-breaking changes have occurred within Kyrgyz society, evolving significantly and rapidly. In particular, important changes have recently started to take place in the social, political and economic life of Kyrgyzstan. Despite the difficulties faced during the democratic reforms, especially after the tragic events of 2010, Kyrgyzstan identified the objectives to meet in order to achieve further development, clearly reflected in the National Sustainable Development Strategy, which identifies key directions of the political, economic and social development of the country for the coming years.

Minister Abdyldaev also tackled developments in the regional and international arena, expressing his concern about the deteriorating global situation, where the international community faces the threats of polarization, growth of armed conflicts and new challenges to security and stability. In particular, he highlighted that Kyrgyzstan strongly condemns all acts of terrorism irrespective of their motivation. The Kyrgyz Republic fully supports the United Nations Global Counter-Terrorism Strategy (UN-GCS), which provides a solid basis for effective counteraction to international terrorism, creating a framework for cooperation between countries and international organizations in this area.