Assessment of the 2019 Presidential Elections in Sri Lanka
Home  /  News 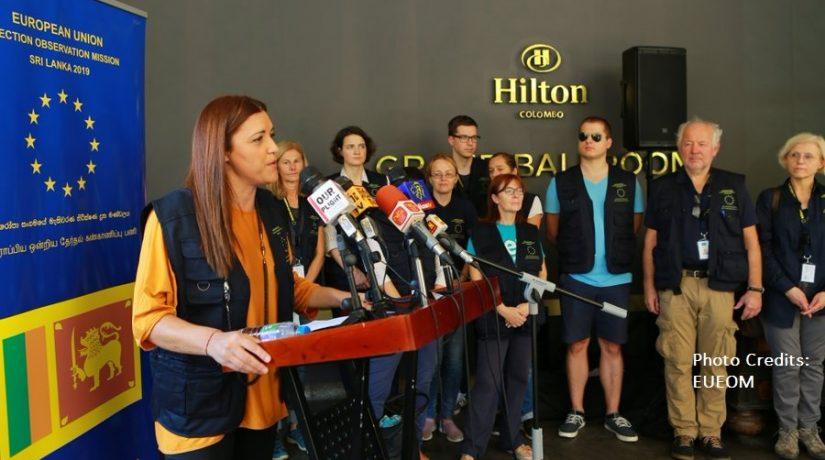 The conclusion of the eighth Sri Lankan Presidential elections on 16 November 2019, has sparked much concern for the democracy of the nation and its people. According to the official results, the election drew to a close with opposition candidate Gotabhaya Rajapaksa of the Sri Lanka Podujana Peramuna (SLPP) claiming victory, receiving 52.25 percent of the island wide votes and his main opponent, Sajith Premadasa of the United National Party (UNP)conceded gracefully, amassing 41.99 percent of the votes. The results have been surprising, as it provides a clear indication of the ethnic, religious and linguistic divide among the citizens of Sri Lanka.

The depictions of voting results suggest the continuity of the ethnic polarisation across the island. The majority of the votes obtained byPremadasa were secured from the Tamil and Muslim minority regions of the North and East, whereas Rajapaksa accumulated votes from the provinces consisting of the Sinhalese-Buddhist majority. The monopolising political parties created much difficulty for alternative party candidates to get a foot in the door. This may also contribute to the strong distinctive partition in the Sri Lankan society, which was displayed through their voting behaviour. It is pertinent that the new President and the government take the potential rise of ethnic polarisation into consideration and act collectively and responsibly for democracy to prevail.

It can be deduced that the spirited Sinhala nationalism fuelled the successful election of Rajapaksa, which was undoubtedly due to the increased demand for a stronger government with a strong leader – the capacity to provide greater security and protect the citizens from violence and terrorism. Gotabhaya, dubbed as the ‘Terminator’ by his family,highlighted and promised stronger national security as his primary objective, following the devastating Easter Attacks earlier this year. As a result, citizens appear to have confided in a more nationalistic-security regime, rather than the paternalistic governance model offered by Premadasa. In addition, Premadasa’s position as a candidate from the ruling party, which displayed weaknesses and failures during its governance as well as a loss of public trust, was set against his promotion to presidency.

Following his victory, the newly elected President Gotabhaya Rajapaksa addressed the nation and emphasized his priorities as head of State. He focused on requesting the Tamils and Muslims, as Sri Lankans, to unite with him, voicing his wishes to ensure that all Sri Lankan citizens have the right and ability to protect and uphold their religious and national identities and reside respectfully and peacefully. Moreover, he re-iterated national security and protection for the Sri Lankan people as his primary duty, intending on employing strong measures to address the situation.

On the election day, the European Union Election Observation Mission (EU-EOM) visited 329 polling stations and more than 25 counting centres. They highlighted that the elections concluded with largely non-violent incidents and were very satisfied with the overall election procedure. However, there were some violent attempts to disrupt and prevent especially minority communities from casting their vote. For example, when gunmen opened fire on buses carrying hundreds of Muslims travelling to polling stations in Mannar, even burning tyres and setting up roadblocks in order to ambush this convoy of more than a hundred vehicles. Fortunately, there were no casualties reported and the buses safely continued their journey.

Furthermore, heavy military presence and unauthorised roadblocks in the North of Sri Lanka aimed at hindering and deterring the Tamil population from voting were also visible. According to the police, local military commanders were warned to refrain from any interference, as they would be reported to courts and prosecuted. This behaviour is also demonstrative of the community insecurities among the Tamils and Muslims, fearful and uncertain of Gotabhaya’s leadership – mainly due to his stringent methods of defence applied during his former position as Defence Minister. Similarly, the Muslims fear rising sentiments of Islamophobia, owing to the strong Sinhala nationalistic mindset portrayed by Gotabhaya – heralded by the violent terrorist attacks in connection with a radical Islamist group. Hence, it was clear these votes would be accumulated by Sajith Premadasa, playing a vital role in deciding the victor of the 2019 Presidential election.

The EOM confirmed that the election process was technically well-managed and a smooth process. However, the preliminary reports illustrated some unscrupulous behaviour, including unregulated campaign spending, biases in the media and abuse of state resources. Chief Observer Marisa Matias, voiced this disappointment and dissatisfaction in a statement, stressing that “While the campaign on the ground was largely peaceful and calm, the playing field in the traditional and online media was affected by instances of bias, hate speech and disinformation. It was further affected by the misuse of state resources by both frontrunners and the absence of campaign finance regulations”.

Consequently, the head of a delegation of Members of European Parliament, Isobel Santos echoed the EOM conclusions. The elections were reportedly peaceful and well-organised, but required the reinforcement of legal frameworks, exclusively focusing on financial transparency and conducting fair play regarding media platforms. Apart from the aforementioned, other forms of intimidation and misconduct were presented by the Sri Lankan Centre for Monitoring Election Violation, including reports of threat and assault. Despite these actions, voter turnout was at a record high, with 15.9 million people, or 85 percent of the population casting their vote successfully.

Finally, the EUEOM stated that the overall election procedure was efficient and enabled the citizens of Sri Lankan to express their fundamental freedoms and rights. This confirms the stability of Sri Lanka’s democratic institutions and the willingness of the citizens to engage in creating unity and cooperation.