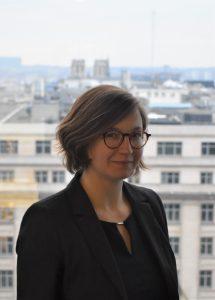 Ms Lin Goethals holds an MA in Political Sciences and International Relations. She has a keen interest in political and diplomatic affairs between the EU and Asia, with a specific focus on public diplomacy and people-to-people relations. From 2013 to 2018 she was a Doctoral Researcher on EU-China Relations at Ghent University and Beijing Normal University, while being based in Beijing as the EIAS Programme Director for Asia. Her research focused on higher education cooperation and student mobility between the EU and China, Hong Kong and Taiwan. During this time she was a Visiting Researcher at the Centre for European Studies at Peking University and the European Union Centre in Taiwan at National Taiwan University in Taipei. Ms Goethals was also a Research Assistant on the Immigrants in China project of the French Agence Nationale de la Recherche (ANR) for ESSCA School of Management, conducting research on “China as a Talent Magnet: The Student Mobility-Migration Nexus in EU-China Relations”. The project was led by Leiden University and brought together a consortium consisting of Oxford University, Manchester University, the University of Cologne, ESSCA School of Management and Fudan University, combining research projects on “Immigration and the Transformation of Society”. Ms Goethals is still affiliated with ESSCA School of Management as an Associated Researcher and Lecturer on EU-China Political and Economic Relations. As the EIAS Programme Director, she is in charge of the general coordination of the EIAS activities, while her research maintains a strong focus on EU-China Relations, the Belt and Road Initiative, Southeast Asia and Central Asia.