Peace and Security in South Asia: A Conversation with Aizaz A. Chaudhry

Peace and Security in South Asia: A Conversation with H.E. Aizaz A. Chaudhry

Since Prime Minister Nawaz Sharif assumed office, Pakistan has embarked on a proactive campaign to reach out to its neighbors as part of a larger vision for a peaceful neighborhood. Today, increased high-level exchanges with its neighbors reflect this important policy shift designed to secure Pakistan internally and externally. In particular, sustained engagement with Afghanistan and dialogue with India have proven to be integral to Pakistan’s future vision of peace and stability in the region. Building on this momentum, Pakistan is pursuing a number of regional economic connectivity projects, such as the Turkmenistan-Afghanistan-Pakistan-India gas pipeline, the Iran-Pakistan gas pipeline, the China-Pakistan economic corridor, among many others. In addition, Pakistan’s resolve to counter and eradicate terrorism and extremism in all its manifestations and improving relations with its neighbours bode a promising future. Pakistan’s Foreign Secretary, H.E. Mr Aizaz Ahmad Chaudhry, will discuss Pakistan’s role and contribution to peace and security in South Asia.

Ambassador Aizaz Ahmad Chaudhry is the current Foreign Secretary of Pakistan, and looks after international affairs, economic coordination, and disarmament affairs. He has thirty-one years of bilateral and multilateral experience with Pakistan’s Foreign Service. Ambassador Chaudhry previously served as the Ambassador of Pakistan to the Netherlands (2009-12), and represented Pakistan in the United Nations for over six years as Pakistan’s Deputy Permanent Representative and earlier as Counsellor (2000-06). He also represented Pakistan in various international organizations, such as Prohibition of Chemical Weapons and the South Asian Association for Regional Cooperation (SAARC), and various embassy appointments in the United States, Qatar, and Egypt. 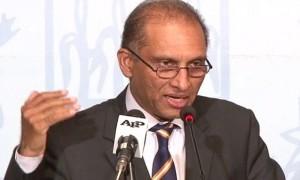