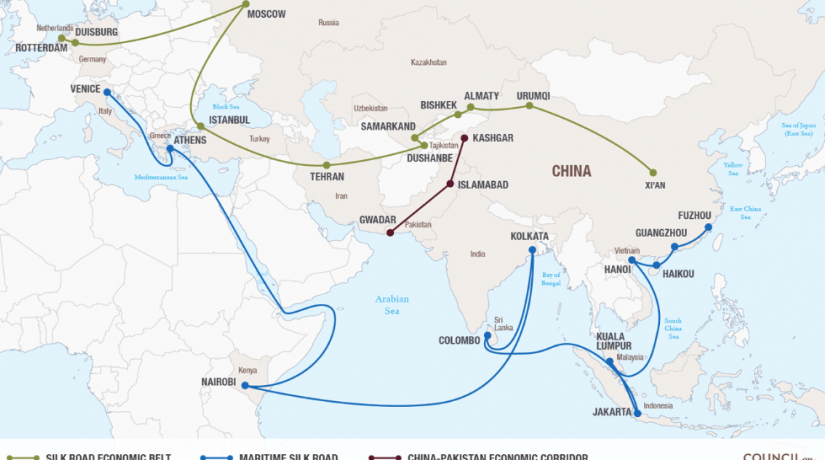 EIAS Fellow Omar Alam recently published an article at South Asia @ LSE Blogs discussing the proposed China-Pakistan Economic corridor, China’s largest overseas investment project to date. He writes that the corridor, if managed effectively, presents a win-win scenario for Islamabad and Beijing, but also has extensive geopolitical implications that could potentially shift the centre of global politics. The article is reproduced below

The China-Pakistan Economic Corridor (CPEC), first announced during Xi Jinping’s state visit to Pakistan in April this year, is a crucial component of the Chinese President’s One Belt, One Road (OBOR) initiative, which has become an indispensable element of discussions about China’s foreign policy and one of the Chinese President’s most emblematic policy initiatives.

CPEC has been heralded as a game-changer for regional and global geopolitics, for reasons that go beyond the unprecedented scale of China’s largest overseas investment project to date. The project consists of extensive investment in Pakistan’s transport, telecommunications and energy infrastructure, with an estimated value of over $46 billion USD. It will eventually extend about 3,000 km, linking the southwestern Pakistani port of Gwadar to the city of Kashgar, in China’s northwestern Xinjiang province.China’s Pivot to PakistanIn order to comprehend China’s recent efforts to bolster its relations with Pakistan, one must first understand the intricate interplay between the geopolitical and geoeconomic implications of closer ties between the two Asian nations, as exemplified by the gargantuan CPEC project. Close relations between the two countries are nothing new. However, what has qualitatively enhanced the relationship is the changing geopolitical context.

With the drawdown of Western – and particularly, the United States’ – presence in Afghanistan, China seized the opportunity presented by the power vacuum to expand its regional sphere of influence and further its economic and strategic interests in Pakistan.Laying the Foundations: Sino-Pakistani AgreementsThe geostrategic significance of CPEC is heightened by earlier Sino-Pakistani agreements. Firstly, China has been granted 40-year operational control of the port of Gwadar on the Indian Ocean, strategically positioned close to the Strait of Hormuz, at the mouth of the Persian Gulf. This will enable China to monitor its critical sea lines of communication, as 60 per cent of its crude oil imports pass through West Asia.Once CPEC is completed and the port is fully operational, China will be able to ensure that a large share of its oil needs are secured via Gwadar, saving time and billions in costs.

More importantly, the new route would circumvent the potentially vulnerable Strait of Malacca. This is all the more significant given the United States’ growing presence in the South China Sea, where it is seeking to expand its influence as part of its pivot to Asia. Thus, bypassing the Strait of Malacca would present China with the option to avoid potential confrontation with the US and diminish the strategic value of the United States’ navy – all while monitoring US naval activities 460 kilometers west of Karachi and still keeping a safe distance from Indian navy bases. Significantly, while Gwadar is being developed as a commercial port for civilian use, it could potentially be transformed into a military facility for China’s navy.Another factor of relevance is Pakistan’s pledge to purchase eight Chinese diesel-powered attack submarines, in what analysts have referred to as China’s largest defence deal to date. In addition to entrenching China’s role as Pakistan’s foremost arms provider, the submarine fleet could potentially counter Indian attempts to blockade Pakistani ports on the Indian Ocean.India’s ConundrumDespite CPEC’s significant strategic implications for the country, India is yet to comprehensively articulate its stance vis-à-vis the economic corridor.

CPEC is projected to cross Gilgit-Baltistan, part of the disputed territory of Kashmir, causing significant concern to India. Similarly, the prospect that Gwadar may one day become a Chinese naval base troubles New Delhi. Despite the fact that CPEC heightens the threat that the Sino-Pakistani partnership poses to India’s regional standing, there are signs of growing Sino-Indian economic interdependence. For instance, this is testified by a steady increase in bilateral trade, as well as China’s pledge to invest almost $20 billion USD in Indian infrastructure development projects. Indeed, CPEC is set to bolster economic relations in the region, potentially benefiting Indian trade and development as well. What is certain is that India cannot sit on the fence much longer, and ought to formulate a clear position regarding CPEC.Mackinder Revisited: A New Heartland?If successfully completed, CPEC will help bolster the economies of both Pakistan and China, strengthening their influence in the region and opening new routes to the resource-rich Middle East via the Arabian Sea. To this aim, Islamabad has extended an invitation to Tehran to join the CPEC initiative. If Iran were to accept, the deal would strengthen inter-regional ties. Moreover, from a geostrategic perspective this would significantly increase the likelihood of the decades-long dream of an Iran-Pakistan gas pipeline.

This would, in turn, allow not only Pakistan, but also the region as a whole to be increasingly self-sufficient, reducing its reliance on the West through enhanced intra-regional interdependence.Regional self-sustenance would be further enhanced if China and Pakistan were to grant numerous Central Asian states’ wish to join the CPEC initiative. However, it is another power that holds greater potential to influence the geopolitical climate in the Eurasian region: Russia. At a time in which Russia is locking horns with the West over Ukraine and other issues, and the combination of plunging oil prices and sanctions jeopardise its economic vitality, Moscow is left with little choice but to pursue closer ties with Beijing. This is all the more significant considering the fact that if Russia were to also join the CPEC bandwagon – as it has reportedly been contemplating doing – a geopolitical climate that is strikingly reminiscent of Halford Mackinder’s ‘Geographical Pivot of History’ would come into being. In essence, the theory posits that the geostrategic centrality and abundance of resources of the ‘Heartland’ – extending from central to northern Eurasia – would allow the region to be self-sufficient and to challenge the West’s sea-power dominance. By focusing on aggrandising its land-based influence in Eurasia through CPEC and a revamped Silk Road, China may finally validate Mackinder’s assertion that “trans-continental railways are now transmuting the conditions of land-power, and nowhere can they have such effect as in the closed heart-land of Euro-Asia”. The continental connectivity web that China seeks to establish in Eurasia would largely be safe from meddling by part of the US, whose naval forces dominate global sea-lanes.To conclude, if effectively managed the Sino-Pakistani economic corridor is likely to present a win-win scenario for Islamabad and Beijing. However, its geopolitical implications are far more extensive, potentially affecting the course of global politics for years to come.