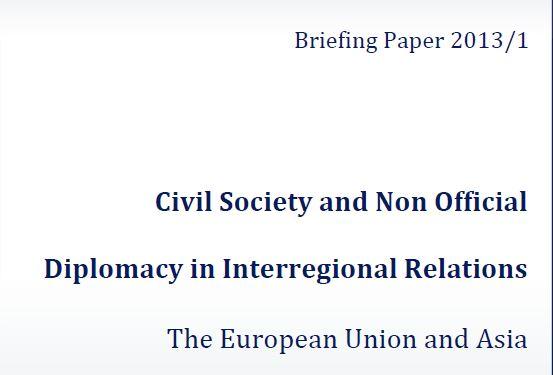 In the last two decades, the proliferation of regionalisms has brought international relations’ scholars to question on the effects that such a phenomenon may entail on the international system. Thanks to the focus given by neoregionalist authors on regions’ external dimension, theories on interregional relations have been developed and several debates around the functions of such relations emerged. Among the main functions that interregionalism might be able to perform, the construction of regional identity and the ability to spread regional integration across the world are considered to be the most relevant ones. In promoting its regional model and boosting the deepening of other regional integration, the European Union is the most interesting case, as its interregional relations have also the merit of involving civil society in international politics. With particular reference to EU-Asia contacts, it has been observed how sections of civil society have been growingly invited to take part in non-official dialogues, mainly tackling social and cultural issues, with the key aim of enhancing mutual trust and knowledge between the two regions. Hence, in the case of ASEM, the involvement of civil society can be seen as an interesting contribution to the democratization of the Meeting, stimulating the dialogue on controversial topics and opening participation’s channel for the population.